Just when it looked like the Mumbai Indians (MI) all-rounder, Hardik Pandya was getting into his groove in the ongoing game against Kolkata Knight Riders (KKR), he got out in teh most bizarre way possible. He was out hitting his own wicket and before getting out he had smashed 18 off 13 balls with the help of two fours and a six. And just when he would have thought of going for some big shots, he was out in a disappointing manner in the 19th over of the innings bowled by Andre Russell.

With this failure, Hardik Pandya’s wait for putting up a good performance with the bat has been delayed further. The allrounder has returned to high profile cricket through the ongoing IPL 2020 after missing the competitive cricket for the second half of last year and the early part of this year due to a back injury.

Hardik underwent surgery in October and was sidelined for a long time. Pandya was named in India’s ODI squad for the home series against South Africa in March but the series was postponed due to the coronavirus outbreak.

Coming to his dismissal, the MI all-rounder, went deep inside the crease to play a wide yorker from Russell. But as he was bringing his bat down, he ended up clipping the bail with his willow. As soon as the Mumbai Indians star realized it, he started walking back.

As fast as the match is concerned, Mumbai Indians managed to reach the total of 195/5 in their quota of 20 overs owing to brilliant batting performances of Rohit Sharma (80 off 54 balls) and Suryakumar Yadav (47 off 28 balls). 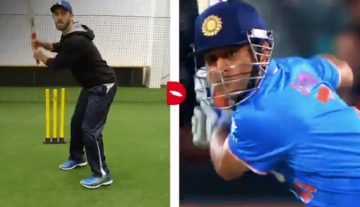