The flamboyant Indian all-rounder, Hardik Pandya underwent a “successful” surgery to treat his lower back injury due to which he will be missing the cricketing action for an indefinite period. On Wednesday, he left for the United Kingdom to get his back checked by the same doctor who treated him during India’s tour of England in 2018 and the 2019 World Cup and decided to get operated.

On Saturday, Hardik posted an image on his official Instagram handle, by captioning it as: “Surgery was done successfully. Extremely grateful to everyone for your wishes. Will be back in no time! Till then miss me.”

Surgery done successfully 🥳 Extremely grateful to everyone for your wishes ❣️ Will be back in no time! Till then miss me 😉

Pandya last played an international match for India in the three-match T20I series against South Africa where he aggravated his back injury. He was not picked in the India squad for the ongoing three-Test series against the visiting South Africans. He is laos expected to miss the Twenty20 International (T20I) series against Bangladesh which will be played in India, starting November 3.

In his career so far, Hardik has played 11 Tests, 54 ODIs and 40 T20Is and expected to play a crucial role for the men in blue during the next year’s World T20 slated to be held in Australia.

Meanwhile, India and South Africa are locking horns with each other first Test of the three-match series. After the lunch on Day 4, India ist at 35/1 in the second innings as the visitors were bundled out for 431 and concede a first-innings lead of 71 runs.  De Kock made 111 and put on a key 164-run stand with Elgar, who scored 160, to thwart the Indian bowling attack on day three of the first Test in Visakhapatnam. 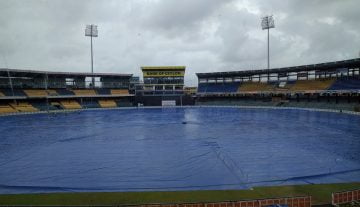 Article
By CricShots - Sep 3, 2017
Weather To Play Spoilsport In 5th ODI Between India and Sri Lanka