The flamboyant Indian all-rounder, Hardik Pandya, who is set to become a father, opened up on the “Koffee” controversy where he faced a lot of heat from his fans and critics for his sexist remarks on the chat show “Koffee with Karan”, hosted by filmmaker Karan Johar. Pandya had appeared on the show with teammate KL Rahul.

Hardik went on to acknowledge that he is the sort of person who accepts his mistakes and moves on in order to ensure he doesn’t repeat them again.

During a chat with Cricbuzz, Pandya elaborated, “When that happened, I said to myself let’s just accept it and try to correct the mistake. That phase does not bother me anymore because my family has accepted it. My family got abused. My father gave an interview post the incident and people made a mockery of it. What hurt me the most was my action caused my family problems, and that’s not acceptable.”

ALSO READ: Shikhar Dhawan Gets A Lockdown Make-over From Zoravar

Talking about how the incident affected his family, Hardik explained, “I am a family guy. Without family, I am no one. My family is my backbone. The Hardik Pandya you are seeing right now is because of the people behind the scenes, looking after me. They make sure that I am mentally stable and I stay happy.”

Hardik and Rahul were suspended for a month by the BCCI for his misogynistic comments on Karan Johar’s popular chat show Koffee with Karan in January last year. The whole nation, along with some of the biggest names in the cricketing fraternity, immensely criticized both the cricketers for their poor conduct on the show.

From being hailed by fans to being trolled on social media, life turned upside down in a matter of days for Hardik and Rahul. The situation turned so bad for them that Pandya even refused to leave his house for 10 days.

ALSO READ: Liam Plunkett to leave England and ply trade for the USA?

Hardik and fiancee Natasa are set to become parents. They shared pictures on social media to announce his fiancee was pregnant with their baby. 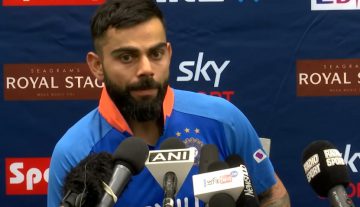