With all the cricketing events coming to a halt, the players are spending most of their time in the comfort of their living rooms. To maintain a connection with their fans, several sportspersons are taking the route of social media to discuss their day-to-day activities. Recently, during one such live interaction, Indian cricketers – Dinesh Karthik and Hardik Pandya had an interaction, from the impact of Coronavirus to the postponement of the Indian Premier League (IPL).

During the chat, Karthik took a dig at Pandya while referring to his Koffee With Karan controversy because of which the latter was suspended by the Board of Control for Cricket in India (BCCI). Taking the jibe in a sporting manner, the all-rounder responded by saying that he was never a coffee drinker and has switched to green tea.

ALSO READ: Shubman Gill Reveals All His ‘Favorites’ Amid Lockdown on Twitter

However, Karthik requested the fans not to ask any controversial questions. During the live chat along with his brother Krunal, Hardik said, “I don’t drink coffee, I drink green tea instead. I drank coffee only once and proved to be too expensive for me. I can bet that Starbucks would not have such an expensive coffee. Since then I stay away from coffee.”

He further added, “One coffee I had, mere ko bahut mehengi padi vo (proved to be too costly for me). If you calculate all the coffee Starbucks has sold till now, mine was much costlier than that.”

Hardik and KL Rahul were engulfed in a huge controversy in early 2019 due to his remarks on the chat show. It led to both being briefly suspended from Team India. Pandya has since got engaged and while his return to Team India has been hampered by injuries and the ongoing coronavirus lockdown, he was expected to play for the country at the T20 World Cup later in the year.

The Indian all-rounder also said that he would be okay with the 13th edition of the IPL being played in front of the empty stands. The season has been postponed until further notice after the Indian government extended the ongoing lockdown in the country to May 3.

Talking about the same, Pandya said, “It will be different. We are used to playing in front of them as the feeling of competition comes with the crowd. I’ve played in the Ranji Trophy without crowds, and it feels different. To be honest, if that [IPL behind closed doors] happens, it will be a smarter option. At least people will be entertained at home.” 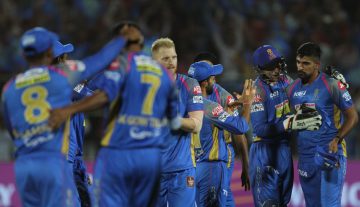