The Indian all-rounder, Hardik Pandya played a whirlwind knock of 105 runs in just 37 balls for Reliance 1 against CAG in the ongoing DY Patil T20 Cup. His century included 7 fours and 10 sixes. It was a typical Pandya innings as he smashed a the bowlers like a walk in the park and a few times he almost cleared the ground as well. The CAG bowlers could do little but see the ball sailing over the boundary line.

Interestingly, Pandya also brought his hundred with a six over square leg. In the 15th over of the innings, the Mumbai Indians all-rounder went berserk as he slammed V.Jivarajan for 26 runs, which included three sixes and two fours. Reliance eventually ended their innings at 252/5 in 20 overs. Shikhar Dhawan, meanwhile, failed with the bat again as he was dismissed on a duck.

Earlier, Hardik made a comeback to competitive cricket last week when he made his first appearance in the current edition of the DY Patil T20 Cup during a match against Bank of Baroda where he scored 38 off 25 balls.

Recently, Pandya has now shared a picture of himself on social where he revealed that he has gained a considerable amount of muscle in the recovery phase. Captioning a couple of pictures comparing his physiques, Pandya wrote: “From 68 kgs to now 75 kgs in three months. Non-stop effort, no shortcuts”.

From 68 kgs to now 75 kgs in three months. Non-stop effort, no shortcuts, #StrongerAndBetter 💪 Credit : @16rajini and @coach_a.i.harrsha thanks maccchi’s

Hardik was expected to be picked for the Indian team for the next leg of the New Zealand tour after he recovered from surgery in the UK last October. He was supposed to play for India’ A’ against New Zealand’ A’ before making a national comeback, but he pulled out of the tour since he was not yet in shape.

ALSO READ: Kapil Dev Has A Suggestion For Virat Kohli To Improve

The Indian team management will be hoping that Hardik will soon come back. His franchise in the Indian Premier League (IPL) — Mumbai Indians — are also closely watching his progress as the tournament is set to begin in another month’s time. 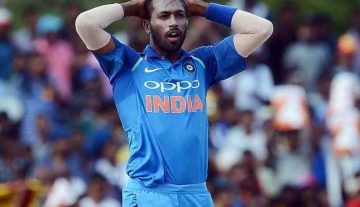 Article
By Sandy - Jan 28, 2019
NZ vs Ind (Third ODI): Umpires Miscounted An Over Of Hardik Pandya