India all-rounder Hardik Pandya smashed two centuries in the recently concluded DY Patil T20 Cup. He had slammed a blistering century for the Reliance 1 team against CAG a few days ago when he amassed 105 off 39 balls with the help of 14 sixes and helped his team to reach the team to a score of 250 plus in a must-win match. He then also picked a 5-fer in the second innings and garnered a lot of praise from across the globe.

Hardik’s fans went gag after seeing him back on the field after having surgery of his lower back in London and then months of rehabilitation to get back into playing fitness. He was supposed to be named in the Indian squad for New Zealand tour but was pulled back due to concerns on him carrying the load of bowling.

ALSO READ: Former Selector Reveals The Challenges During His Tenure

Dy Patil T20 Cup was his return to the competitive cricket and he made the most of the opportunity. In the first semi-final match between Reliance 1 and Suryakumar Yadav-led Bharat Petroleum Company Limited (BPCL) at the DY Patil Stadium in Navi Mumbai, Pandya helped his team to recover from the struggling situation of 10/2. He slammed a brilliant 158* in 55 balls which were adorned by an amazing 20 sixes and 4 fours in his innings.

During this innings, Shivam Dube was bowling to Hardik in the 18th over of the match while batting on 119 in 43 balls. Dube, wary of being hit out of the ground, decided to go wide on the offside. Pandya was ready for it and was standing on a middle guard. The all-rounder quickly moved outside off stump and met the delivery at the right length and deposited it over covers for six almost standing on one leg.

The amazing thing was that all of Pandya’s weight was on his right leg, with his other leg in the air as he smashed the ball for six, highlighting the timing and power he possesses. In the shot, Pandya also proved his match fitness, given that there was pressure in his back as well. 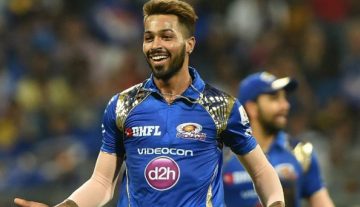