While the Pakistan cricket team is busy in South Africa for their international tour, the 29-year-old Haris Sohail has recently returned to his home. Initially, it was reported that he was ruled out from the tour due to the injury but now it has been revealed that he was under the spell of black magic.

The tour has begun with the three-match Test series. Though Sohail featured during the only three-day warm-up game in that tour prior to the Test series (against Cricket South Africa Invitation XI at Benoni), where he played a match-winning knock of unbeaten 73 runs in the fourth innings of the game, he missed the first Test of the series at Centurion that started on December 26, 2018.

According to the report, he had a knee injury prior to that opening Test of the series. Later, after the Centurion Test, he was sent back to Pakistan while it was reported that his injured knee’s condition was worsening.

However, according to some reports, Sohail has claimed that he was under the spell of black magic.

According to BOL News report, “Haris first told the management before returning home about his fear, and then, instead of joining rehabilitation camp on return, he went to his hometown Sialkot, citing the same reason.”

Moreover, that report also added that the Pakistan team management had decided to not disclose Haris’ claim after observing his present mental stress.

However, it is not the first time when Harris Sohail has claimed about the supernatural forces during the international cricket tour. When the Pakistan cricket team had a tour in New Zealand in 2015, the left-handed batsman had complained about the supernatural forces as he had claimed that a ghost shook his bed. It had forced him to change the hotel room and later, he was sent back to home at early with an injury report. 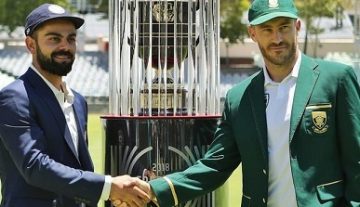 Article
By CricShots - Jan 4, 2018
Preview: SA vs Ind (1st Test): India Will Looking To Star The Series With A Victory