17-years old Jemimah Rodrigues is a new talent in Indian women’s cricket team. Making an international debut in the recently concluded T20I series on the South African, Jemimah got few chances and counted those very well. Specially, she showed her batting skills in the last game where she scored 44 runs off 34 balls.

Indian women T20I captain Harmanpreet Kaur praised the young talent Jemimah Rodrigues. Making her debut in the first T20I of the five-match T20I series in the recently concluded T20I series on the South African, Jemimah got only three chances where she scored total 87 runs with the average of 29.00.

In the last game, where Indian women’s cricket team won by 54 runs and clinched the series by the 1-3 margin, the right-handed batter scored a brilliant 44 runs off 34 balls after coming to bat at no.3.

Talking about her performance, Harmanpreet also revealed that why they promoted her in the batting order at the no.3 position for the last game. According to The Indian Express, Harmanpreet spoke out, “We just decided that if we lose an early wicket then we can send her (at No. 3). Basically, she is an opener but we have Smriti and Mithali and we can’t just tell them to sit and give her a chance. That is the reason we decided that if we lose an early wicket we can send her and give her a chance to do well. In the last game when she came, she had a lot of pressure on her because we lost two early wickets but today was a good chance to promote her and we just gave her a chance and she executed very well.”

Talking about Jemimah, Harmanpreet showed her faith by quoting, “She has done really well in the domestic level and that gave her confidence to do well in the international level. I know she is very young but we know what she is capable of doing for the Indian team. She is young and we do need young players in our team who can do better in international cricket.”

If we look at Jemimah’s recent domestic form, she had scored a record 1,013 runs in the Women’s Cricket U-19 One Day League & Knockout tournament, which had been finished in November 2017. 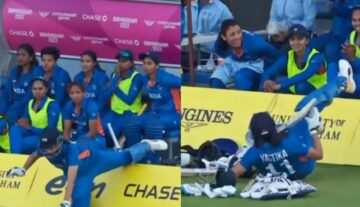