Kolkata Knight Riders (KKR) had won their first game of the Indian Premier League (IPL) 2022 against Chennai Super Kings (CSK). However, they suffered a shocking batting collapse and ended up with a total of a mere 128 runs in the first innings. They kept losing wickets at regular intervals and were reduced to 83/7 when Andre Russell walked in to bat.

Despite the fact that KKR kept on losing wickets from the other end, Andre Russell continued playing his natural game. He smashed one boundary and three sixes during his knock of 25 runs. Harshal Patel was bowling the 14th over of the innings for RCB and Russell looked to be at his absolute best.

ALSO READ: Adam Milne Is Excited To Learn A Lot From MS Dhoni In CSK

Harshal Patel bowled a length ball wide outside off on the penultimate ball of the over and the West Indies power-hitter tried to hit it hard. Andre Russell missed his attempt and just edged the ball to wicketkeeper Dinesh Karthik. With that wicket, KKR almost left no hope in the game and they eventually lost the game by 3 wickets and 4 balls to spare. Dinesh Karthik hit the winning runs for RCB in the final over.

Here is the video of Harshal Patel dismissing Andre Russell:

Harshal Patel becomes the 2nd bowler in history after Siraj to bowl 2 maiden overs in an IPL innings.

What a fabulous comeback by RCB bowling lineup after last match. Quality stuff from Wanindu, Harshal Patel and not to forget David Willy who created pressure in two of the key powerplay overs.
#KKRvsRCB #CricketTwitter @RCBTweets 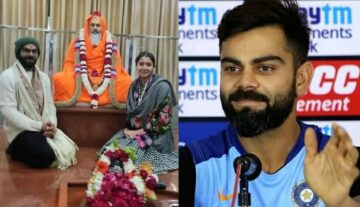 Twitter Reaction
By CricShots - Feb 1, 2023
Old Video Of Virat Kohli Goes Viral As He Visits A Spiritual Hermitage In Rishikesh