Cricketers proposing to their girlfriends after a game in the stadium has been a familiar story for the fans and the latest to the list was the Hong Kong cricketer, Kinchit Shah. In a packed stadium in Dubai, Shah grabbed the attention of the crowds by proposing to his girlfriend with a ring after the Asia Cup 2022 game against India got concluded.

A loud roar was heard as offered the ring and the Hong Kong cricketers were up in the stands to watch the moment. Notably, India’s Deepak Chahar had caught the eyes in the stadium last year, proposing to his girlfriend after an IPL game for the Chennai Super Kings.

ALSO READ: Sunil Gavaskar Vouches For KL Rahul To Get A Longer Rope

Here’s the video of Kinchit Shah proposing to his girlfriend:

In the video, Kinchit Shah could be seen kneeling down in front of his girlfriend and offering a ring. The pair were seen hugging each other after the proposal and it did bring a lot of happiness around the Hong Kong dugout.

Kinchit Shah came in at No. 4 for Hong Kong while chasing 193 and played a decent knock of 28-ball 30, which included two fours and a six. The left-hander did show a good technique but was strangled in the middle after not being able to rotate the strike against Indian spinners. His sweep shots turned out to be productive and he will be looking to make a bigger impact in the game against Pakistan on September 2.

ALSO READ: Parthiv Patel asks to include Rishabh Pant in the team

Meanwhile, after the 40-run win on the back of Suryakumar Yadav’s epic knock, India has qualified for the Super 4 of the tournaments, topping Group A with four points. Hong Kong will take on Pakistan next in a virtual knockout fixture as the loser of that game will be knocked out of the tournament. The Associate nation recently won a lot of hearts for providing a signed jersey to Virat Kohli after the India game. 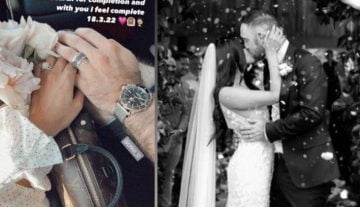