The film showcased young fans transported to the exciting world of T20Is, getting to play with their favorite players, all to a peppy soundtrack composed by Amit Trivedi that had the players grooving through the week. The avatar animation featured a brand-new broadcast technology that blends both 3D and 2D effects – as a lot of matte painters, animators, lighters, and compositors seem to have worked hard on it.

The theme song has released exactly one month before the beginning of the Super 12 matches. It is one of the songs which will be enjoyed by everyone and is groovy. Here is the video shared by the ICC:

🎵 Let the world know,
This is your show 🎵

Talking about the T20 World Cup, Kieron Pollard can be heard saying, “T20I cricket has proven time and time again that it can engage fans of all ages, and I’m excited to bring some fireworks to the stadiums in the UAE and for those watching all over the world.”

Glenn Maxwell meanwhile can’t wait for the tournament to get started. He had said, “The ICC Men’s T20 World Cup is going to be one of the toughest and most exciting on record. There are so many teams that could take the trophy and every game will be like a final. We can’t wait to get started knowing the caliber of players we have.” 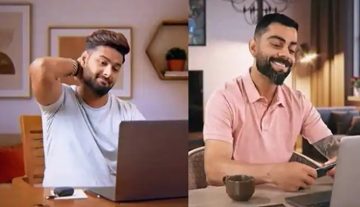 Videos
By CricShots - Oct 15, 2021
Virat Kohli Takes A Slight Dig At Rishabh Pant Over His Comparison With Dhoni