South African wrist-spinner Imran Tahir was racially abused during the fourth One-Day International (ODI) between South Africa and India in Johannesburg, Cricket South Africa confirmed on Monday (February 12). The fan was eventually expelled from the stadium after the legspinner reported the incident to the security officials.

In the press release of CSA, they said, “Cricket South Africa has noted and is aware of the circulation of video footage featuring Imran Tahir on social media and Whatsapp groups.”

They further added, “Imran Tahir was verbally and racially abused by an unknown man during the fourth One-Day International (ODI) against India at the Bidvest Wanderers Stadium on Saturday. Tahir reported the incident to the stadium security and was subsequently accompanied by two security personnel to identify and to have the man ejected from the stadium. Tahir made no physical contact with the offender or any of the children in the vicinity. The incident is under investigation with the CSA and stadium security teams.”

This is not the first time Tahir has been subjected to such kind of behavior on the field. During the 2015 World Cup, the fans at Manuka Oval had a run in with Tahir with one of the fans shouting “Why don’t you go stroke your pet camel?” at him. Tahir had faced such an incident at the same venue during the 2014 tour as well.

Tahir as excluded from the playing XI in the fourth ODI as he was replaced by the pacer Morne Morkel. His performances in the first three ODIs wasn’t pretty up to the mark as per his standards. He is also standing at the numero uno position in the latest ICC ODI player rankings.

In the ongoing series so far, Imran has been able to pick just one wicket in despite being the no.1 all-rounder despite the fact that the matches have been played at his home turf.

Here is the video circulated on social media featuring Tahir in an altercation with a fan, which is getting viral: 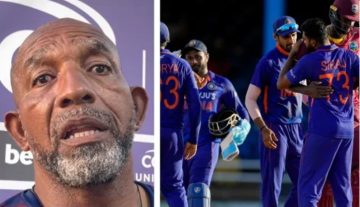