As the Legends League Cricket 2022 is going on, veteran spinner Imran Tahir stole the show with his free-flowing batting recently. In the match between India Maharajas and World Giants, India Maharajas scored 209 runs in their allotted 20 overs.

While Naman Ojha smashed 140 runs in 69 balls, Captain Mohammed Kaif also scored 53 runs in 47 balls as well. While he took a lot of balls to score, Wasim Jaffer and Badrinath got out on duck. Ryan Sidebottom was the pick of the bowler for the World Giants as he claimed 2 wickets.

While Maharajas set up a good total for Giants, Kevin Peterson opened the innings for them and tried to steady the ship. But wickets started falling from another end. Kevin O’Brien and Anderson wickets got out in quick succession. Jonathan Trott got injured and he couldn’t return in the middle as well. Haddin, captain Sammy, and Morkel also contributed but it looked like Maharajas had the upper hand in the game. The Giants required 72 runs in 6.2 overs when Imran Tahir came into bat and turned the table.

Imran Tahir came after Captain Daren Sammy got out. Tahir came on the pitch and hit two continuous boundaries as well. Then Morkel and Tahir started hitting all over the park and led Giants to victory. Morkel scored 21 runs in 15 balls but it was Tahir who made it possible. He scored 52 runs in 19 balls, including 3 fours and 5 sixes in his innings and took the team to the finish line with ease. 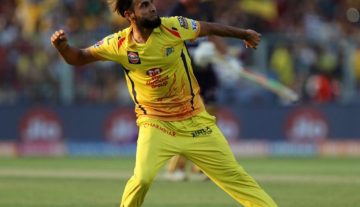