Team India has finally returned to their home turf after a grueling series in New Zealand as they will be locking horns with South Africa in the three-match ODI series. The first match of the series is scheduled to be played at the picturesque HPCA stadium in Dharamsala on Thursday.

Both teams come into this series on the back of contrasting results. While the Proteas swept a formidable Australia, India found themselves on the wrong side of an ODI and Test whitewashes against New Zealand. However, the Indians always termed as favorites while playing at home, especially this time as the veterans like Shikhar Dhawan and Hardik Pandya are returning to the squad. The men in blue will be wary of the South Africans, who have momentum on their side and will be looking to draw first blood in Dharamsala.

Although Dharamsala is traditionally a good batting track, persistent rain might make it a bowling friendly track. The weather forecast doesn’t look promising with a potential washout can be expected. If a game takes place, both teams would be looking chase with ample swing on offer for the pacers in the early stage of the game. The spinners should come into play in the middle overs while dew would be a key factor as the game progresses. Here are some of the predictions for the game:

India welcomes back the trio of Bhuvneshwar Kumar, Dhawan and Hardik for this series. While Shikhar will be opening the innings along with Prithvi Shaw, skipper Virat Kohli and Shreyas Iyer hold the fort in the middle order. KL Rahul should continue as the preferred wicket-keeper ahead of Rishabh Pant.

India could field both Ravindra Jadeja and Hardik with Bhuvneshwar Kumar set to share the new ball with Jasprit Bumrah. Although India would be tempted to field Kuldeep Yadav and Yuzvendra Chahal, only one of them is likely to play in Dharamsala.

South Africa will be fielding their strongest XI with Faf du Plessis and Rassie van der Dussen likely to feature in the top order. Janneman Malan and skipper Quinton de Kock will be opening the innings with Heinrich Klaasen and David Miller taking up middle order roles.

The proteas will be tempted to play two spinners although Andile Phehlukwayo’s performances against Australia should give him the nod over George Linde. Lungi Ngidi leads the bowling attack alongside Anrich Nortje while Lutho Sipamla could get the nod over Beuran Hendricks as the third seamer. 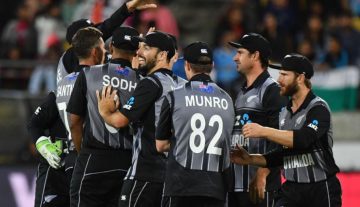