With India having an unassailable 2-0 lead in the three-match series, the Virat Kohli and his men will aim for a clean-sweep against South Africa as the two sides face each other in the third and final Test, scheduled to commence on Saturday. India has been far superior compared to their opponents, as they have lost 16 wickets in three innings combined.

While the visitors have shown some grit with the bat, their bowlers have been wayward, with India scoring more than 500 runs in the first innings of both the Test matches. Adding more misery to the visitors’ quest for a win in this series will be injuries to Aiden Markram and Keshav Maharaj, which will further dent their confidence ahead of the final Test at the JSCA International Stadium Complex in Ranchi.

The pitch in Ranchi should be similar to the one in Pune, with the batsmen able to play their shots once they get their eye in. Both pacers and spinners should get ample help from the conditions. The weather forecast isn’t too great for the duration of the Test with thunderstorms expected on a couple of days as well. With valuable points on offer in regards to the ICC World Test Championship, here are some of the predictions for the game:

India could retain the sameXI for the final Test with some help on offer for the pacers in Ranchi. This would give Ravindra Jadeja another opportunity to cement his place as a lead all-rounder in the team. The top order looks pretty solid with Mayank Agarwal and Virat Kohli already scoring double hundreds in the series.

Wriddhiman Saha, whose wicket-keeping skills have been the talk of the town, scored a century in the last Test played at Ranchi and will look to strengthen his case for a permanent spot in the side. India might opt for playing Kuldeep Yadan in place one either Ishant or Umesh.

With Markram and Maharaj are ruled out for this game, George Linde and Zubayr Hamza will have teh opportunity to prove their worth, with the latter also be getting the opportunity to open the batting alongside Dean Elgar. Apart from this forced change, South Africa would be looking to make some changes in their overall squad as well, with the likes of Nortje and de Bruyn unable to utilize their opportunities.

ALSO READ: Dean Elgar Comments on Points Ahead Of Third Test Against India

Lungi Ngidi and Heinrich Klaasen are in line for a berth in the playing XI. Much is expected from Senuran Muthusamy and Vernon Philander, who has toiled for countless hours without much to show for in the previous matches, while Quinton de Kock and Faf du Plessis hold the key in the middle order for the Proteas. 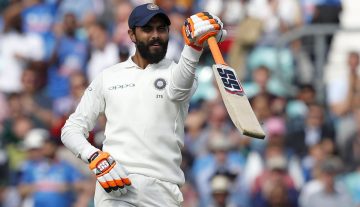 Social Shots
By CricShots - Jul 1, 2020
Ravindra Jadeja Thanks Wisden For Naming Him MVP In Tests