The fourth ODI of the five-match series between India and West Indies which was scheduled on October 29 at the Wankhede Stadium has now been shifted to the Brabourne Stadium,  as per the reports in Cricket Country. However, the official word from the BCCI is still not arrived.

Brabourne Stadium has the capacity of accommodating 20,000 people and it last hosted an international match in 2007 when India took on Australia in a T20I. The last ODI to be held at the stadium was in 2006 when Australia faced West Indies in the ICC Champions Trophy.

The stadium, named after Lord Brabourne, Governor of Bombay, has so far hosted eight ODIs, 18 Test and one T20I. India has played only one ODI at Brabourne, beating New Zealand by six wickets in 1995. West Indies have played four ODIs here losing three and winning one.

Earlier, The Mumbai Cricket Association (MCA), who is organizing the fourth ODI were left without any office bearer to sign vendor payments and the Supreme Court had to decide if MCA will be in a position to host the match or not.

According to a report in PTI last week, MCA Secretary Unmesh Khanwilkar along with another official sought help from the Bombay Court to form an ad-hoc committee. The High Court now has asked MCA to approach the apex court.

One of the sources in MCA said, “The documentation work is going on. In a day or two, the petitioners will approach the top court seeking directions for the conduct of the October 29 game.”

Meanwhile, a few MCA officials had met a senior BCCI official to provide an update of the problems currently faced by the association with no authorized official to clear dues to vendors or salaries to employees. 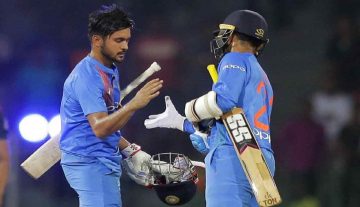