Derby (UK),India are expected to face a tough task when they take on hosts England on the opening day of the ICC Women’s World Cup cricket tournament here on Saturday.

India will bank on the experience of Mithali Raj, the world’s second highest-capped batter behind Charlotte Edwards of England with 177 women’s ODIs to her name.

The first stage of the tournament will see the eight contenders battle it out in a round-robin format where every team plays each other once.

Mithali has an impressive record at the World Cup with an average of 60.83 and a highest score of 103 not out which she registered against Pakistan at the previous edition in 2013.

The 34-year-old middle-order batter will aim to continue her fine record in the game’s showpiece tournament as seven-time semi-finalists India aim to reach the final for the first time.

Appearing in her fifth World Cup, Mithali has a total of 22 outings so far and her experience will prove to be valuable for the Indians.

“Our first target will be to reach the semi-finals, but for that you need to be able to play good cricket throughout the tournament and have good momentum,” Mithali said in a statement.

Harmanpreet, playing her third World Cup, is a toast of world cricket with her swashbuckling style and part time off-spin. She has the distinction of notching up 107 runs against England in 2013 — the highest score by an Indian in a World Cup.

In the bowling department, India will depend mainly on veteran speedster Jhulan Goswami, who is playing her fourth World Cup.

Jhulan, the highest wicket-taker in the world in limited overs formats, will be ably supported by left-arm spinner Ekta Bisht who is currently ranked at the sixth position in the International Cricket Council (ICC) rankings.

The Indians are in good form, having thrashed Sri Lanka by 109 runs in their warm-up match. They are, however, expected to face a tough challenge from England.

The English have won six matches of the overall nine encounters between the two teams since India debuted in the second edition of the World Cup in 1978.

The Indian girls registered their first win against England in the third encounter between the two sides at the 1982 World Cup in New Zealand.

England have been impressive whenever they have hosted the ICC Women’s World Cup, winning the competition on both the previous occasions in 1973 and 1993. They won their third title at the 2009 edition in Sydney.

The hosts, led by skipper Heather Knight, will be hoping that playing at home proves to be lucky once again as they bid for a fourth crown.

“It’s going to be a brilliant tournament. The support we have had from the tournament, I think it’s going to be the most visible and supported Women’s World Cup we’ve had,” Heather said in a statement.

New Zealand and Sri Lanka will face off in Bristol in the other match on Saturday.

The Kiwis will be keen to lift their first 50-over trophy away from home, as Suzie Bates and Amy Satterthwaite look to reaching 100 international caps each.

Suzie Bates has 98 women’s ODI caps to her name while Amy Satterthwaite has 95.

Victorious in 2000, New Zealand finished second the last time they played in the competition in England.

The experienced Kiwis have an ace up their collective sleeves in 16-year-old leg-spinner Amelia Kerr.

“To win 100 caps for your country is a big achievement at any time but to do it at a World Cup would be even more special,” Satterthwaite said.

One of four teams to progress to the tournament via the World Cup Qualifiers, the experience in the Sri Lanka team could prove vital — with nine players aged 31 or above.

Defending champions Australia, the most successful team in the tournament with six titles, will start as the favourites once again.

Australia captain Meg Lanning is the only player to have 10 Women’s One-Day International centuries to her name. She was also part of the successful side at the 10th edition of the tournament in India four years ago and will be keen to stage a successful title defence.

Australia will start their campaign against the West Indies on June 26.

The West Indies team will come into the tournament with plenty of confidence, having lifted the ICC Women’s World Twenty20 last year, as part of a hat-trick that included the ICC World Twenty20 won by the men’s team and the ICC U-19 Cricket World Cup taken home by their colts.

Stafanie Taylor will lead the side in this competition for the first time, with history behind her after becoming the only women’s player to achieve the World No.1 spot in both ODIs and Twenty20 Internationals (T20I).

At the other end of the spectrum, South Africa has no players in that age bracket, with the honour of captaincy falling on 24-year-old Dane van Niekerk.

She became just the seventh player to reach 1,000 runs and take 100 wickets in women’s ODIs in February, becoming the first South African to reach the latter figure.

Pakistan will be led by Sana Mir, who could reach 100 ODI caps in this tournament. Her haul of 104 wickets is the highest by any Pakistan woman bowler. 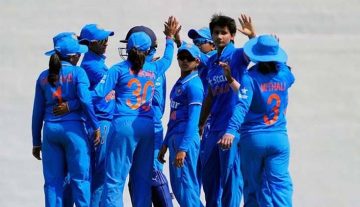