On Friday, India and Australia will lock horns with each other in Ranchi is expected to be a cracker of a game as the hosts will be looking forward to sealing their fourth successive bilateral series win and Aaron Finch’s touring side out to avoid an eighth straight series defeat.

In order to give it much more interesting angle to the game, there are a few statistical milestones beckoning for a few central figures of the Indian team, chief among them the skipper Virat Kohli and former skipper MS Dhoni.

Virat Kohli was the man of the match for his 40th ODI century, nine less than Sachin Tendulkar’s ODI record. Kohli’s 116 off 120 balls, including 10 boundaries, propped up India’s par total of 250 all out in the 49th over. With his knock of 116 runs at the VCA stadium, Virat Kohli surpassed Dhoni to become the highest scoring batsman at the venue with 325 runs. He has scored his runs in five innings at an average of 89.63. Dhoni stands second with 268 runs in five innings.

ALSO READ: Virat Kohli Reveals The Final Over Chat With Dhoni And Rohit

If he gets to 76 in Ranchi on Friday, then Kohli will only be sitting behind Tendulkar and Ganguly.

Another milestone is waiting for opening pair of Rohit Sharma and Shikhar Dhawan. The pair needs 21 runs to move past the tally of 4387 runs scored by Sehwag and Tendulkar as openers in ODIs. In 100 innings as openers, Rohit and Dhawan have scored 4367 runs at an average of 44.11 per match, with 14 stands of more thn 100 runs.

The allrounder Ravindra Jadeja, who in Nagpur became third India to the double of 2000 runs and 150 wickets in ODIs, will become India’s eighth most successful bowler if he manages two wickets in Ranchi. Jadeja has 172 career wickets in ODIs, one short of Irfan Pathan’s 173. 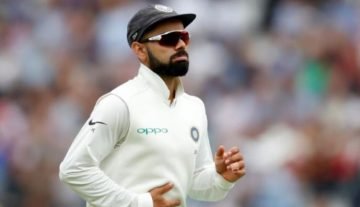