The chants of “Pakistan Murdabad” were heard from the fans during the ongoing opening Test of the two-match series between India and New Zealand at the Green Park stadium in Kanpur on Thursday. Even if not in great numbers, there was a really boisterous crowd present on the first day of the Kanpur Test.

In the first half-hour of India’s innings, the fans tried to motivate Team India with slogans of “Jeetega bhai Jeetega, India jeetega”. Amid this, one fan screamed “Pakistan Murdabad” with a few others following it with “Murdabad Murdabad”.

Later the Indian fans were heard chanting “Bharat Mata ki jai” and “Vande Mataram” to show their patriotic side. Here is the video of the same:

The political tension between India and Pakistan has always been high. There have been multiple rounds of firing and unfortunate deaths of soldiers at the border of both nations.

Ajinkya Rahane, India’s stand-in skipper, won the toss and elected to bat first. The hosts have got off to a decent start after deciding to bat first despite losing Mayank Agarwal early in the first 9 overs itself. Shubman Gill has led the way with the bat along with Cheteshwar Pujara with the Indian team aiming to post a big total on the board in the first innings.

This is a comeback game for Gill who was injured and ruled out of the England tour after the World Test Championship (WTC) final against New Zealand. He was certain to take Virat Kohli’s spot at number four in the Kanpur Test but with KL Rahul getting injured, Gill came out to open the innings with Agarwal.

And Shubman Gill was looking too good pouncing on the opportunity as the opener for the Indian team. He has smashed five fours and a six in his half-century so far and has looked extremely elegant in his stay. 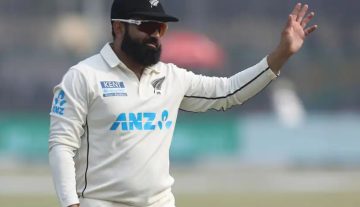 Twitter Reaction
By CricShots - Dec 4, 2021
Cricketing Fraternity Salutes Ajaz Patel For All The 10 Wickets In Mumbai