The first test match between India and New Zealand ended in a draw, but it was one of the most enthralling Test matches ever. Both the teams played their A-game and they left no stone unturned in trying to win the game. The second and final Test between the two teams has gone underway in Wankhede Staidum, however, the first day has been cut short due to the wet outfield. As the play on the first session was curtailed, Indian fans criticized BCCI for the below-standard drainage system.

The fans were all set to witness some riveting cricket action on Friday morning, however, their hopes were dashed as rain played a spoilsport in Mumbai. The toss was delayed by more than a couple of hours and the play eventually commenced at 12 PM but the fans were not happy with the conditions at the Wankhede stadium as netizens slam the richest cricket board BCCI.

After the continuous rain in Mumbai for the last two days, the ground was drenched and the groundsmen toiled hard to prepare the ground so the game could be started. Even after the hard work of the groundsmen, the match was delayed and netizens took to Twitter to criticize the poor drainage system in the Wankhede stadium.

Interestingly, the groundsmen were seen using vacuum cleaners to dry the wet patches on the outfield as before the game started, umpire Nitin Menon was concerned about the area near the bowlers’ run-up. Even umpire Anil Chaudhary agreed to the fact that the conditions won’t be really suitable for cricket.

Ahead of the game, Anil Chaudhary had said, “Our main concern is the 30-yard circle and the bowlers’ run-ups. The conditions will not be 100% because it has rained the last two days. But once the sunshine is out, we may get better conditions. Safety is the only thing, the resit is fine.”

The match had a delayed start and the Indian skipper Virat Kohli decided to bat first after winning the toss. The team has lost two quick wickets after a steady opening partnership of 80 runs between Mayank Agarwal and Shubman Gill.

Here is how the fans reacted to the drainage system at Wankhede:

Why such an inefficient drainage system ?
Isn't @BCCI richest board ?

#MumbaiTest #indvsnz yet another match gets affected due to wet outfield. #ICC should take into account huge losses. Not good for test cricket lovers. The least you could do is cover the whole playing ground not just pitch. Is it too much for #BCCI, the richest body in the world?

BCCI the richest cricket board is having worst drainage system. I think Sri Lanka cricket groundsmen will do better job than this. #INDvNZ

Vacuum cleaner being employed as a drier at the run-up. Highly innovative! #INDvsNZ pic.twitter.com/GAl4ppXYR1 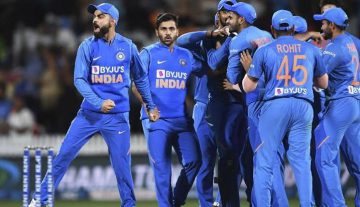 News
By CricShots - Jan 22, 2022
BCCI Announces The Revised Schedule For The Windies Tour Of India