On Thursday, the terrorist attack in Jammu & Kashmir’s Pulwama district has left the Indian people in a state of utter shock and anguish. More than 40 CRPF soldiers were martyred and a lots of them were injured after terrorists attacked an army convoy with an immense amount of explosives. According to the reports, the well-known terrorist group Jaish-e-Mohammed has claimed responsibility for the attack.

Following the dreadful incident, the netizens expressed their anger and grief on social media. Several Indian cricketers took to their official Twitter account to condemn this shameful act of Terrorists. They also expressed the concerns for the affected families of the martyrs.

Former Indian opener Gautam Gambhir has openly challenged Pakistan stating that now a conversation with the neighboring country has to be on the battlefield.

Yes, let’s talk with the separatists. Yes, let’s talk with Pakistan. But this time conversation can’t be on the table, it has to be in a battle ground. Enough is enough. 18 CRPF personnel killed in IED blast on Srinagar-Jammu highway https://t.co/aa0t0idiHY via @economictimes

Former cricketer and skipper Virender Sehwag paid homage to the martyred soldiers and their families. He also wished for a speedy recovery of the injured CRPF personnel.

Really pained by the cowardly attack on our CRPF in J&K in which our brave men have been martyred . No words are enough to describe the pain. I wish a speedy recovery to those injured.#SudharJaaoWarnaSudhaarDenge

Current Indian opener Shikhar Dhawan too was left disturbed with the news of this unfortunate incident.

Deeply saddened and disturbed by the news. I condemn the terror attack in #Pulwama. My condolences to the families of the jawans who sacrificed their lives.

Sad and pained to hear about the dastardly attack on our brave CRPF men in #Pulwama in which many of our jawans have been martyred . I pray for a quick and speedy recovery of those injured in the attack.

The Indian skipper, Virat Kohli also expressed his condolences, as he tweeted, “I’m shocked after hearing about the attack in Pulwama, heartfelt condolences to the martyred soldiers & prayers for the speedy recovery of the injured jawaans.”

I'm shocked after hearing about the attack in Pulwama, heartfelt condolences to the martyred soldiers & prayers for the speedy recovery of the injured jawaans.

Here are some more reactions from Indian cricketers:

Really pained to hear about the attack on our #CRPF men who have been martyred in the attack in J&K. I pray the coward attackers are taught a lesson at the earliest.

Appalled and deeply disturbed by the news of CRPF jawans killed in Kashmir's Pulwama. My thoughts and prayers with the martyrs' families.

Terrorism is heinous & barbaric but it is also cowardly. If killing people is the agenda, how can someone progress? India's giant leap is on the back of peace & economic growth. And terrorism will never stop it.

According to initial reports, two buses of the CRPF convoy were targeted in the attack and even gunshots were also heard after the IED blast. Reports also suggest that three battalions of CRPF with as many as 2,500 soldiers were being shifted in the convoy. 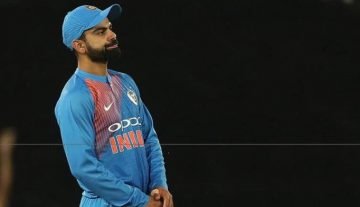