In some endearing visuals, the Indian players were seen playing with Pakistan captain, Bismah Maroof’s baby. The said visuals were captured after the Women’s World Cup match between the two teams in Mount Maunganui that India won by 107 runs. After the game, some of the Indian players were had visited the Pakistani dressing room to meet the six-month-old baby.

Notably, Maroof has traveled for the World Cup with her daughter, Fatima. The Indian players also went on to click a few pictures with the baby who was at that time in her mother’s arms. The warming scenes between the two arch-rivals in the perfect endorsement of the spirit of the game.

The Pakistani captain, who has traveled with her infant child, has been lauded by many for her dedication and commitment while playing for her nation. Many fans have been heaping praises on the 30-year-old while also being in awe of the visuals of her and the baby.

Here are the videos of the Indian players having a ball with the infant:

This is so WHOLESOME 🥺#INDvPAK pic.twitter.com/5SxEGmOI5K

Having won the toss and electing to bat first, Team India was reeling at 114-6 at one point. Just when it looked like the women in blue will go nowhere in the game, the Indian lower middle order resurrected things and steadied the ship as both Sneh Rana and Pooja Vastrakar showed immense character in their 100+ run partnership for the 7th wicket.

While Rana played a flamboyant knock of 53 runs in just 48 balls, Vastrakar top-scored for her side with 67 off 59 balls. The two batters hit four and eight boundaries respectively with India managing to post a decent enough target of 244/7 on the board. Pakistan in their chase never really got going, folding up for 137 in 43 overs.

While India will now be traveling to Hamilton where they take on New Zealand on March 10, Pakistan remains in Mount Maunganui to face Australia on March 8. 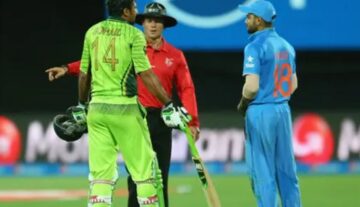