Kamlesh Nagarkoti came into limelight after having a successful U-19 World Cup. Legends like Ian Bishop and Sourav Ganguly amongst others were praising high, where the former even tweeted that he is someone the BCCI should keep an eye on for the future. Consistently bowling close to 150kph, it was like a matter of time for Nagarkoti to get an opportunity with the Indian team. An IPL contract with Kolkata Knight Riders worth Rs.3.2 crore followed after the successful campaign before a career-threatening back injury derailed him from the circuit. He last played a List A game on February 14, 2018, and missed two season’s IPL and domestic cricket as well.

“It was tough, I used to get emotional watching the IPL on TV. All my teammates were playing and I was recovering from an injury. It used to be frustrating but my main aim was to get fit and get back on the ground. I worked really hard for that,” Nagarkoti told Cricketnext after he was selected in the India squad for the Emerging Asia Cup tournament.

“Coaches told me that my front-foot was going across and that was increasing the pressure on my back, I have made it bit more straight and I am comfortable with the action. There is no question of dropping my pace,” he added.

Rahul Dravid, the coach of the U19 team – played an important role in Nagarkoti’s success. Dravid gave the example of Pat Cummins to the youngster who also came into the squad as an 18-year-old before a back injury kept him out of the game for six long years.

“He (Dravid) never let negative thoughts come into my mind, he used to be with me in the nets and kept tracking my recovery. Always told me that he believed in my potential which really kept me motivated,” added Nagarkoti.

“It’s sad to see someone who likes to be on the ground being restricted to the bed because of injury. But he is slowly returning to his best, he’s practicing hard and his bowling rhythm is also back. I think we will see the best of him in the future. The type of injury he had, it can take upto four years to recover but he has done it in two. It shows how hard he has worked,” says Surendra Singh.

However, Kamlesh Nagarkoti isn’t thinking much and wants to concentrate on the job which is in his hand.

“Whatever happened has happened, I am not thinking about it too much. I want to show everyone that I am still the same bowler and I am looking forward to whatever opportunity I get. I have worked hard on my body, diet to regain my fitness,” he concluded. 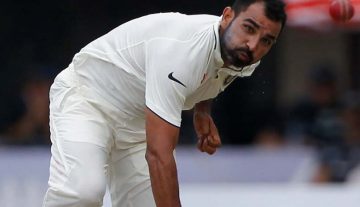 Article
By CricShots - Mar 17, 2018
Mohammed Shami Asks For A Support From BCCI