An England side has succumbed to a huge defeat by 151 runs and to make things worse they are already missing several fast bowlers, they could also be missing Mark Wood for next week’s third Test after the express quickly injured himself while fielding at Lord’s. However, there are doubts, over whether the Durham fast bowler, whose career has been blighted by injuries, will be fit to feature at Headingley, with England due to name their squad on Wednesday.

England is already witnessing injuries to Stuart Broad, Jofra Archer, and Chris Woakes, while all-rounder Ben Stokes is unavailable due to a mental health break.

Describing the same, England coach, Chris Silverwood informed, “The medics are working on him (Wood), we’ll find out more in the next couple of days. We will make a decision, along with him and our medics, closer to the time. But if he’s not right, he’s not right. I certainly won’t push him into playing if he tells me he’s not right. I will look after him.”

But for all Silverwood lauded Wood’s “superb effort”, many felt he should have been more careful on the field. England, now without a win in their last seven Tests, repeatedly bowled too short at Mohammed Shami and Jasprit Bumrah during their unbroken ninth-wicket stand of 89. The India duo then starred with the ball as England, set a target of 272, was shot out for 120 with 49 balls left in the day.

England’s fast bowlers appeared more interested in seeking revenge from Jafer for the rough treatment number 11 James Anderson received when he batted, rather than dismissing the India tailenders.  Silverwood, himself a former England bowler, praised Shami and Bumrah by saying: “I thought they handled the situation really well.”

ALSO READ: Arun Dhumal Confirms IPL 2022 Will Be A 10-team Affair And Updates About Crowd In UAE

Meanwhile, there was no escaping England’s ongoing lack of top-order runs, with the first three of Rory Burns, Dom Sibley, and Haseeb Hameed failed to do much as they witnessed a duck at Lord’s. Silverwood said: “You’ve got to do what’s best for the team, ultimately, and find the best way of progressing England to a place where big first-innings runs — and second-innings runs — come in on a consistent basis.” 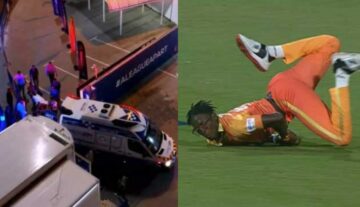 Videos
By CricShots - Feb 7, 2023
Dominic Drakes Admitted To The Hospital After Suffering A Huge Injury