During the 44th match of the 11th season of the Indian Premier League (IPL) between Kings XI Punjab (KXIP) and Kolkata Knight Riders (KKR) at Indore, Kolkata Knight Riders’ Andre Russell picked up two wickets on consecutive deliveries to put the opposition in a spot of bother.

After Ravichandran Ashwin won the toss and put the Knight Riders in to bat, they ended up registering their highest even IPL total, i.e., 245-6 in 20 overs. Opener Sunil Narine (75) and captain Dinesh Karthik (50) scored individual half-centuries to power KKR to such a total.

In the second innings, Lokesh Rahul and Chris Gayle provided Kings XI Punjab with a much-needed boost at the top of the order. The hosts had scored 51-0 in the first quarter of their innings. However, in the last over of the powerplay, Russell hindered their progress.

Russell was introduced into the attack in the fourth over of the innings. On the fourth delivery of his second over, Russell bowled a bouncer to Gayle, who edged the ball behind the wickets to Karthik. He ended up scoring 21 (17) with the help of two fours and a six. Watch the video:

Mayank Agarwal was sent in to bat at No. 3. On his first delivery, he pulled a Russell delivery straight to Javon Searles at deep square leg. Watch the video: 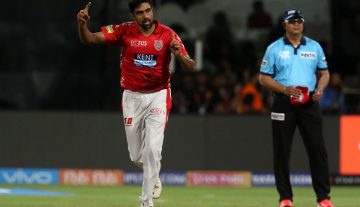