During the 13th match of the 11th season of the Indian Premier League (IPL) between Kolkata Knight Riders and Delhi Daredevils at Kolkata, Delhi Daredevils’ opener Jason Roy grabbed a sensational catch to dismiss Chris Lynn. The Knight Riders’ opener got out at a time when he was expected to up the ante for his team.

Earlier, Gautam Gambhir, captain of Delhi Daredevils, had won the toss and chose to field. The Daredevils had brought back Chris Morris into the playing eleven for Daniel Christian. On the other hand, the Knight Riders had included Tom Curran in place of Mitchell Johnson.

After the powerplay, the Knight Riders had scored 50-1. Robin Uthappa getting out in the eighth over was a substantial blow for the home team. What further dented their progress was the dismissal of Lynn.

Opening the batting for the Knight Riders, Lynn ended up scoring 31 (29) with the help of four fours and a six. He got out on the penultimate delivery of the 11th over. Mohammad Shami, who was bowling his first over, was the man behind the wicket of Lynn, who mis-timed a knuckle ball to Roy, who grabbed an impressive take at long-on. 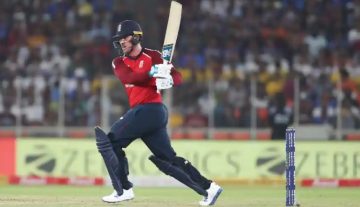