During the 51st match of the 11th season of the Indian Premier League (IPL) between Royal Challengers Bangalore (RCB) and Sunrisers Hyderabad (SRH) at Bengaluru, Manish Pandey and Kane Williamson took on the latter’s country man and rival on the field, Colin de Grandhomme, to score 22 runs of an over.

After Williamson, captain of Sunrisers Hyderabad, won the toss and put the hosts in to bat, they lost their openers cheaply in the powerplay. In a situation where Bangalore desperately needed a partnership, AB de Villiers and Moeen Ali stitched a 107-run stand for the third wicket. The partnership came off 57 balls as both the batsmen scored brisk half-centuries.

Chasing 219 runs to win the match in the second innings, Sunrisers started on a positive note after they got a couple of chances going their way.

Williamson, who came in to bat at No. 3 in the sixth over, continued on his supreme form in the season as he left no stone unturned for his team to win the match. In the 15th over of the match, de Grandhomme’s second over, Pandey and Williamson hit him for two fours and two sixes. 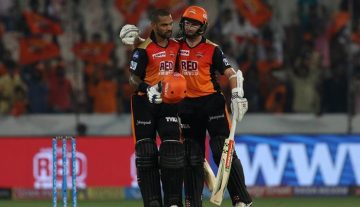