Both teams were playing their opening game in this season where KXIP won the toss and decided to bowl first. DD put the total of 166 runs (166/7) at the end of 20 overs which was comfortably chased by the hosts in 18.5 overs after losing 4 wickets.

Now, we will look at the hits and flops players of this match.

KL Rahul (KXIP) – KXIP opener KL Rahul set the match for his team. Chasing down the 166 runs target, KL Rahul smashed the fastest IPL half-century after completing his 50 runs in just 14 balls. Rahul scored 51 runs off just 16 balls before getting out. His innings made easy for his team to secure a comfortable victory. Rahul hit 6 fours and 4 sixes in that remarkable innings.

Rahul was awarded the Player of the Match after the end of the game.

Karun Nair (KXIP) – After the dismissal of KL Rahul, Karun Nair took the responsibility whose innings carried the momentum that had set by the opener KL Rahul. Like Rahul, Nair also scored a half-century as he was dismissed after scoring 50 runs off 33 balls. His dismissal made no pressure for his team to secure a comfortable win.

Gautam Gambhir (DD) – Making a comeback in the DD squad after almost 8 years, skipper Gautam Gambhir provided his trademark responsible batting. Scored an important 55 runs off 42 balls which was very crucial for his team as other top-orders failed to cross the 20-runs mark.

Amit Mishra (DD) – Coming to bowl in the powerplay over (3rd over), Amit Mishra was punished by the KXIP opener KL Rahul as the right-handed batsman collected total 24 runs in that over. That over hugely affected DD who failed to make a comeback in the later moment.

In his next three overs, Mishra conceded total 22 runs and failed to claim at least a wicket. The leg-spinner’s final bowling figure was 4-0-46-0 which was the most expensive bowling figure in that match.

Mohammed Shami (DD) – After the recent big controversies with the wife Hasin Jahan, all had eyes on Mohammad Shami’s performance in this match. The DD right-arm pacer hugely disappointed with the ball as he bowled only 2 overs where he conceded 12 and 14 runs respectively (2-0-26-0).

Yuvraj Singh (KXIP) – The 36-year-old hugely disappointed with the bat. The left-handed batsman Yuvraj Singh faced 22 balls and only managed to score 12 runs with two boundaries. His slow batting was raising the pressure on himself where he failed to move out from that. However, his slow batting didn’t lose the momentum too much for the team. 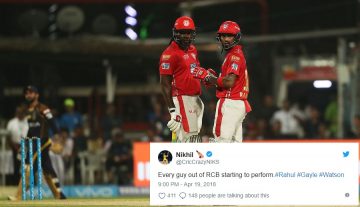