In the 23rd game of IPL 2018, Sunrisers Hyderabad (SRH) snatched a remarkable victory in the low scoring away game against the hosts Mumbai Indians (MI) at Wankhede Stadium (Mumbai) on Tuesday night. While SRH put only 118 runs (118/10 in 18.4 overs) on the board, MI failed to chase that in the tough pitch as they were bowled out for just 87 runs in 18.5 overs. SRH won this match by 31 runs which is a good margin of victory in this kind of low-scoring T20 game.

However, the hosts’ batsmen failed to chase down that low target as they were bundled out for just 87 runs. Only opener Suryakumar Yadav and no.5 batsman Krunal Pandya got the double-digit scores. A superb bowling and great fielding from the SRH team always kept the hosts’ side under pressure in the second innings this game.

While Suryakumar was the highest scorer in this game as he scored 34 runs off 38 balls, Krunal played a 24-run knock off 20 balls. However, those two knocks were not enough to chase that small target in the tough pitch.

SRH leg-spinner Rashid Khan was awarded the Player of the Match for his superb bowling effort with 4-0-11-2 bowling figure including 16 dots.

Here are some Twitter reactions of this low-scoring game:

Such a great day for bowlers today! Defending a score of 120 needs some effort. Great temperament shown by @SunRisers bowlers! #MIvsSRH #IPL2018

Would Be Moral Victory For Mumbai Indians If They Lose This One Before 19th Over. #MIvsSRH #MIvSRH #SRHvMI

For MI in this season:

These low scoring matches are so boring. IPL should allow me to bowl 4 overs to each team in case the target is less than 120. #MIvsSRH #MIvSRH #SRHvMI

IPL matches in which all 20 wickets fell:

Yusuf Pathan becomes the first player to score 3000-plus runs and take 30-plus wickets in IPL. #MIvSRH

Tonight’s match in the @IPL is set up to be a cracker. This is why T20 cricket wins!!! Low scoring match on difficult wicket. @mipaltan not using their batting brains at this stage and @SunRisers right in the game, showing the art of attack. #MIvSRH

That Awkward Moment When Suryakumar Is Standing In The Middle Of Victory Of Sunrisers. #MIvsSRH #MIvSRH #SRHvMI

Rohit Sharma Is Giving Tight Slap To Haters Who Say He Performs Only In #IPL. 🤪😇#MIvSRH #MIvsSRH

Mitchell McClenaghan, what a review. pic.twitter.com/3kFoFYFKD0

Rohit Sharma Intentionally Keeps Kieron Pollard In Team So That He Can Cover-up For His Talent By Pollard's Performance. #MIvsSRH #MIvSRH #SRHvMI pic.twitter.com/xXqKOtZBwT

The SRH innings is so bad, both the striker and non-striker want to be at the same end. #MIvSRH #IPL

Great sportsmanship on display by Kane Williamson who did not wait for the umpire's decision and chose to walk. 👏👏#CricketMeriJaan #MumbaiIndians #MIvSRH

Rohit Sharma – No score is too high to defend on this ground, we will bowl first

SRH – No score is too low for our bowlers to defend, bring it on!

At this rate Mumbai Indians might actually need Mahela Jayawardene and Sachin Tendulkar to bat for them. #MI #IPL

Want to go to 😴 but this game is keeping me awake…who do you think will win? For me, @mipaltan IF Suryakumar remains unbeaten. #MIvsSRH

Match heading towards close finish. Whatever the result, must say admirable defence of low score by SRH

Pitch in favour of bowlers, which is not a bad thing, but Mumbai batsmen as guilty of poor strokes as Hyderabad's. Top stuff frm Rashid Khan 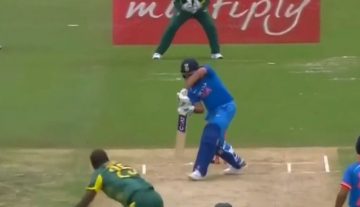