SRH skipper Kane Williamson chose to bat first after winning the toss. Despite the powerful performances from the top-order batsmen, SRH was restricted to 172/9 at the end of 20 overs due to the middle-order batting collapse.

In reply, KKR had a strong start which led them to a victory and secured their spot for the playoffs in IPL 2018. KKR chased down that target in 19.4 overs after losing 5 wickets.

Now, we will briefly talk about some important reasons for SRH’s defeat in this game.

SRH top-order batsmen provided the great start as they were at 141/2 at the end of 15 overs. When it was looking like that SRH was targeting for 200+ total, they faced a massive batting collapse as they were restricted to 172/9 at the end of 20 overs. They only managed to score 31 runs in the last 5 overs and lost seven wickets including 4 wickets in the final over.

Also read: (SRH vs KKR) – Turning Point of the Match

At the end of the match, SRH was around 20-25 runs short and their weak death-over batting was fully responsible for that. 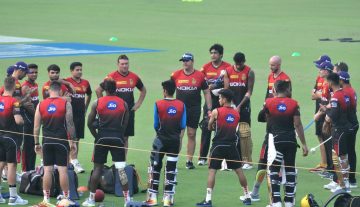