Earlier Ajinkya Rahane, captain of Rajasthan Royals, had won the toss and chose to bat. Rajasthan Royals made three changes to their playing eleven, bring in Heinrich Klaasen, Shreyas Gopal and Ben Laughlin in place of Jos Buttler, Ben Stokes and Anureet Singh. On the other hand, Royal Challengers Bangalore fielded an unchanged playing eleven.

On the second delivery of the over, Klaasen opened the face of the bat to a fuller delivery to hit through the backward point region for a six. On the next following delivery, he walked across to a full-toss and hit it for a four through the fine-leg region. Siraj got his revenge in the final ball of the over, after Klaasen hit a high ball straight in the hands of Moeen Ali at long-off. He ended up scoring 32 (21) with the help of three fours and a six. 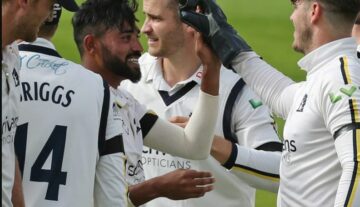