During the 22nd match of the 11th season of the Indian Premier League (IPL) between Delhi Daredevils (DD) and Kings XI Punjab (KXIP) at Delhi, Kings XI Punjab’s Mujeeb Ur Rahman successfully defended 17 runs off the last over as Kings XI Punjab ended up winning a tight contest by 4 runs.

After Gautam Gambhir put Kings XI Punjab in to bat, the visitors lost wickets at regular intervals, which didn’t help their case at all. Without Chris Gayle, their task had become all the more daunting. In their allotted quota of 20 overs, Kings XI Punjab had scored an underwhelming 143-8.

In the second innings, their bowlers bowled much better then their batsmen batted. As a result, the Daredevils lost wickets at regular intervals so much so that they struggled to sneak past through Punjab in a 144-run chase. Delhi Daredevils required 17 runs to win the match in the last over.

Rahman was slated to bowl the last over against Shreyas Iyer and Amit Mishra. Iyer failed to yield runs on the first delivery but followed it with a flat-bat six over the bowler’s head to bring back Delhi into the contest. Iyer refused to run a single down to long off on the following ball but managed to sneak a couple of runs on the fourth delivery of the over.

Needing 9 runs in 2 balls, Delhi’s task was getting all the more difficult. The pressure got on to the bowler as he bowled a flat delivery down the leg side, which Iyer guided for a four. On the last ball, Iyer tried to replicate a six which he hit earlier in the over but mis-timed the ball to Aaron Finch at long off. 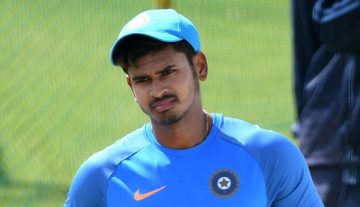 News
By Aditya Pratap - Feb 19, 2018
Iyer is not worried about competition in middle-order