KKR are the only team among the four knockout entrants to have got their matches in their own backyard. If they win the Eliminator, their Qualifier 2 will also be at the same venue on May 25.

Besides having the home advantage, KKR will also start as favourites against depleted Royals who made the playoffs by the skin of their teeth.

Sans the services of in-form England wicketkeeper-batsman Jos Buttler and fellow all-rounder Ben Stokes, Rajasthan got past Royal Challengers Bangalore in a must-win last league engagement to make it to the knockouts.

Chennai Super Kings’ five-wicket victory over Kings XI Punjab sealed Royals’ place in the playoffs while Mumbai Indians also lost to Delhi Daredevils. Both Punjab and Mumbai were in the fray for the fourth playoff spot which went to Royals.

For KKR, a five-wicket triumph over Sunrisers Hyderabad ensured they finished third in the table.

Underlining that his match-winning innings in the Nidahas Trophy final was no flash in the pan, Karthik has led from the front.

Mystery spinner Narine has enhanced his credentials as an opener by becoming only the fourth player to score 300 plus runs and grab more than 15 wickets in an IPL season, after Shane Watson, Dwayne Bravo and Jacques Kallis.

Apart from the pair, Lynn has struck form at the right time after enduring a subdued season by his standards.

Andre Russell is always a threat with bat and ball and in M. Prasidh Krishna — who returned career-best figures of 4/30 against Hyderabad — KKR have found a tall pacer who hits the deck hard and bowls good length stuff.

Royals will once again miss Buttler who is on national duty after getting a Test call-up. Buttler has been their batting mainstay piling up 548 runs in 13 matches at 54.80.

Big-hitting South African wicketkeeper-batsman Heinrich Klaasen showed his class in the last game, his 32 off 21 studded with some stunning shots. The Karnataka pair of Gowtham and Gopal impressed too.

While Gowtham smacked 14 off five balls in the last over and conceded just six runs in two overs of offspin, besides also dismissing Virat Kohli for 4 in the third over, Gopal finished with career-best figures of 4 for 16.

Just over a week back, the two sides met at the same venue with KKR getting the better of Royals by six wickets.

The Eden pitch, this time, would not be prepared the way KKR want it to as the Eliminator won’t be treated as a home game.

BCCI East Zone curator Ashish Bhowmick has been tasked to prepare the track and it is expected to have a fair bit of grass on it. Just two out of seven games — vs RCB on April 8 and CSK on May 3 — have been played on this pitch this IPL. 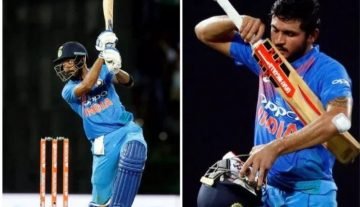 Match Prediction
By CricShots - Nov 3, 2018
Ind vs WI: Predicted XI Of India For The First T20