The Afghan leg-spinner Rashid Khan has continued to impress one and all with his mesmerizing bowling spells in the ongoing 11th edition of the Indian Premier League (IPL). He bowled beautifully in the last game against Delhi Daredevils (DD) on Saturday and helped his team Sunrisers Hyderabad (SRH) to get back in the game after the wickets of Prithvi Shaw and Rishabh Pant.

Rashid returned with the magical figures of 2/23 which helped SRH restrict DD and also won the Man of the Match award. However, the English woman cricketer Danielle Wyatt once again praised him for his performance and is excited to meet him soon.

There is a special bond between the two cricketers as they admire each other a lot on various social media platforms and it is no surprise that Wyatt loves his cunning leg-spin bowling. This is not the first time that she has lauded Rashid on the micro-blogging site Twitter for his bowling this season and the leggie from Afghanistan also promptly responds to her message always.

ALSO READ: Rashid Khan reveals the Secret behind his performance

The official Twitter handle of SRH congratulated Rashid Khan for his brilliant spell which earned him the top award of the game. However, Danielle Wyatt was quick to respond to the tweet and termed him as the Wizard in her message. The conversation continued as usual with Rashid replying her and also wished her and Sarah Taylor all the best for the home season which is all set to begin on Sunday. He replied, “Thank you . GOOD LUCK to you @Danni_Wyatt and @Sarah_Taylor30 for the first game of season for @SussexCCC Tomorrow”.

Wyatt was impressed a lot after receiving his wishes and was also excited to have him in the country soon for the T20 Blast where Rashid will play for Sussex. Here’s the thread of the conversation:

Congratulations to @rashidkhan_19 for a well deserved Man of the Match award as he was the key behind building up pressure on the Daredevils.#SRHvDD #IPL2018 pic.twitter.com/2mktWUmP27

Thank you . GOOD LUCK to you @Danni_Wyatt and @Sarah_Taylor30 for the first game of season for @SussexCCC Tomorrow 👍🏻👍🏻 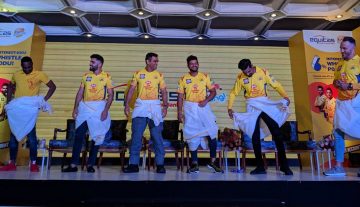