During the 13th match of the 11th season of the Indian Premier League (IPL) between Kolkata Knight Riders (KKR) and Delhi Daredevils (DD) at Kolkata, Sunil Narine became the 11th bowler to cross the 100-wicket in the IPL. He achieved the feat during his spell of 3-0-18-3, which also earned him the ‘Purple Cap’ for now.

Dinesh Karthik, captain of the Knight Riders, had introduced Narine into the attack during the powerplay. Narine bowled the last over of the powerplay, giving away 11 runs. Narine was called back to bowl in the 12th over, where he picked up a couple of wickets and gave away just four runs.

On the third delivery of his second over, Chris Morris (2) completely missed a Narine delivery and ended up getting bowled. Morris became Narine’s 100th IPL victim. On the penultimate delivery of the over, Vijay Shankar (2) was found wanting in front of the stumps against Narine.

On the penultimate delivery of his third over, the 14th of the innings, Sunil dismissed Mohammad Shami (7) after the Indian pacer had hit the ball straight to Andre Russell at deep midwicket.

After completing the 100 wickets, Narine took to Instagram and shared that his father wished him for achieving the milestone. He also shared his father’s reply. Here’s his post: 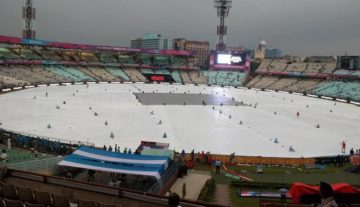