The Indian Premier League (IPL) is known for the grand cricketing extravaganza where franchises never leave any stone unturned to win the championship. The tournament started a decade ago in 2008 and has grown ever since. It is perhaps the biggest platform for youngsters and also a stepping stone for them in order to groom themselves for international games in the future.

A golden coloured IPL trophy is presented to the champion teams, which stays with them a year before the next seasons of the tournament starts. However, there’s a script in Sanskrit, which is engraved on the trophy. There have been a number of cricketers who were unknown entities ahead of the tournament but has grabbed eyeballs in front of packed stadiums and viewership on televisions.

Recently, a Twitter handle of Vedic School posted the actual meaning of the transcript on the trophy. He is what they wrote on the social media. The tweet read: “Not many of us know, the motto of IPL is in Sanskrit; same is inscribed on IPL trophy as well. #IPL It is “Yatra Pratibha Avsara Prapnotihi”, means “Where talent meets opportunity”. Hindi – जहां प्रतिभा अवसर प्राप्त करती है ।”

Not many of us know, motto of IPL is in Sanskrit; same is inscribed on IPL trophy as well. #IPL 🏆
It is "Yatra Pratibha Avsara Prapnotihi", means "Where talent meets opportunity". Hindi – जहां प्रतिभा अवसर प्राप्त करती है । pic.twitter.com/nmuggi6ZlG

The eleventh edition of the league is currently underway and has already witnessed a number of humdingers. Many players like Mayank Markande, Deepak Chahar, Ankit Rajpoot among others have grabbed a lot of limelight a bit of headline with the stupendous performance they have been able to display on the cricket pitch.

IPL is currently is in halfway stage where the transfer-window, where teams can transfer layers to other franchises, has already opened. There has been cut-throat tournament as teams can’t afford to be self-righteous as it can be a major detriment to their campaign as the extravaganza moves into the business end. 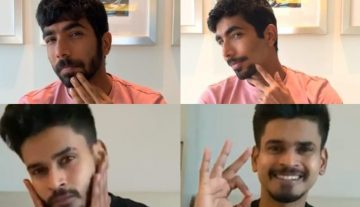 Social Shots
By CricShots - Nov 5, 2020
Jasprit Bumrah And Shreyas Iyer Break The Beard Ahead Of The Qualifier