Despite being the biggest extravaganza of cricket, the Indian Premier League has had its fair share of fights between the players. In a high-intensity tournament like the IPL, the tempers are bound to increase for winning is given the utmost priority by each and every player.

Here is a list of the Top 4 biggest altercations in the IPL so far:

4. Sourav Ganguly vs Shane Warne – During the 18th match of IPL 2008 between Rajasthan Royals and Kolkata Knight Riders at Jaipur, two legendary names in the game of cricket, Sourav Ganguly and Shane Warne got involved in a spat. It all happened when Ganguly pulled a Yusuf Pathan delivery to Graeme Smith at deep mid-wicket. The umpire had ruled the skipper of the visiting team out, but, he asked the umpire to have a look at the catch again. Upon several replays, the decision was turned in the favor of Ganguly, which was opposed by Warne and the duo had a heated conversation on the ground. 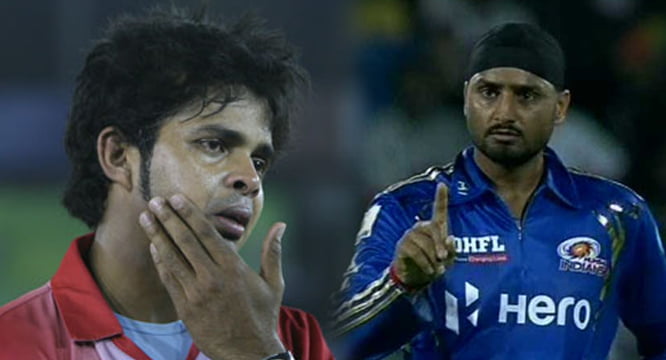 3. Harbhajan Singh vs Sreesanth – After the 10th match of IPL 2008 ended between Kings XI Punjab and Mumbai Indians, the Indian pair of Harbhajan Singh and Sreesanth were involved in one of the most controversial happenings in the IPL. After Punjab won the match by 66 runs, it is said that Sreesanth consoled Harbhajan for the loss. An angry Harbhajan replied back with a slap in the face to the fast bowler. It was evident from the video footage that Harbhajan slapped the fast bowler with no provocation from his side. Harbhajan was suspended for the rest of the season for his act.

2. Kieron Pollard vs Mitchell Starc – During the 27th match of IPL 2014 between Mumbai Indians and Royal Challengers Bangalore at Mumbai, Kieron Pollard and Mitchell Starc had a go at each other to the extent that Pollard’s West Indian teammate Chris Gayle, also part of the Royal Challengers setup, had to step between both the players. It all happened in the 17th over when Starc bowled a bouncer to Pollard. The duo exchanged some gestures but the situation became volatile when on the next delivery Pollard pulled out of the delivery and Starc threw the ball at him. Pollard came down the track with the intention of hitting the bowler with the bat in hand but stopped midway.

1. Gautam Gambhir vs Virat Kohli – During the 12th match of IPL 2013 between Royal Challengers Bangalore and Kolkata Knight Riders at Bengaluru, two Delhi boys (Gambhir and Kohli) representing Bangalore and Kolkata uttered oaths at each other till the time a third Delhi player in Rajat Bhatia came in between them. It all happened when Kohli skied a Laxmipathy Balaji ball to Eoin Morgan at sweeper cover. While he was walking back to the pavilion, he and Gambhir got involved in a very animated-cum-foul conversation.