The Indian Premier League (IPL) franchise Chennai Super Kings (CSK) under the leadership of MS Dhoni has reached the top of the points table as they defeated he Virat Kohli led Royal Challengers Bangalore (RCB) by 6 wickets in a low-scoring game in Pune.

As MS Dhoni finished the match off for CSK once again, yet another crazy MS fan breached the stadium security to reach out to him and touch his feet. In the last game as well, another fan did manage to reach out to Dhoni and this was the second time in the ongoing season of IPL that a fan has managed to reach out to the ‘Captain Cool’.

As far as the match is concerned, it was yet another disappointing loss for Virat Kohli’s RCB who succumbed to spin this time. It was Ravindra Jadeja who did the damage for CSK taking 3 off 18 from in his quota of four overs to break the backbone of RCB batting. While Harbhajan Singh picked the wicket of AB de Villiers which lowered down the moral of the Bangalore based franchise.

In reply, CSK opener Shane Watson was dismissed early for just 11 runs before another opener Ambati Rayudu and no.3 batsman Suresh Raina put an important 44-run partnership for the second wicket.

In the middle of the innings, CSK lost three quick wickets as the set batsmen Rayudu (32 runs) and Raina (25 runs) were dismissed along with Dhruv Shorey (8 runs).

However, later MS Dhoni and Dwayne Bravo put a crucial unbroken 48-run partnership for the fifth wicket that secured an easy victory for the hosts. At the end of that innings, Dhoni was not out on 31 runs while Bravo was unbeaten on 14 runs.

Here is the video of the fan taking the blessings from MS Dhoni:

As @ChennaiIPL climb to the top of the #VIVOIPL points table, yet another fan rushes to meet his idol @msdhoni. #CSKvRCB #VIVOIPL pic.twitter.com/p14RVjGFs9 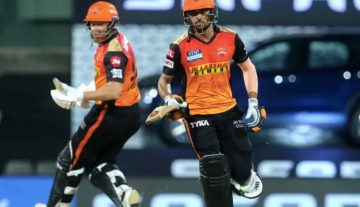