On Tuesday, the two-table toppers Chennai Super Kings (CSK) and Kolkata Knight Riders (KKR) locked horns with each other in the 23rd match of the 12th edition of the Indian Premier League (IPL) at the MA Chidambaram Stadium in Chennai. After winning the toss, the CSK skipper, MS Dhoni asked the visitors to bat first citing the chances of a heavy dew later in the innings. The decision went through as the hosts won the match by 7 wickets, which has now made them the table toppers.

During the toss, surprisingly, both the captains revealed that they have made no changes to their respective squads. However, batting first the KKR openers disappoint as Chris Lynn and Sunil Narine were back in the pavilion in the first two overs itself.

Then the inform batsmen, Robin Uthappa, and Nitish Rana were batting in the middle, but the latter failed to continue his form owing to a brilliant catch from Ambati Rayudu at the short mid-wicket on the bowling of Chahar. After his dismissal, even Uthappa was dismissed in the 5th over, then Dinesh Karthik added 20 runs for the 5th wicket with Shubman Gill, before the KKR skipper getting out in the 9th over by Imran Tahir. In the very next over of the Tahir, Gill also got out owing to a brilliant stumping by Dhoni.

After Gill’s dismissal, Andre Russell along with Piyush Chawla added 29 runs for the 7th wicket. With the help of that, KKR managed to reach a total of 108/9 in their quota of 20 overs.

During the chase, CSK lost Shane Watson early and even Suresh Raina got out in the 5th over itself owing to a brilliant running catch by Chawla. However, despite the two early, wickets, Faf du Plessis and Ambati Rayudu carried forward the momentum as they added 46 runs for the third wicket before the latter getting dismissed in the 15 over. Even after his dismissal, along with Kedar Jadhav, Du Plessis took CSK over the line with 7 wickets in hand and 16 balls to spare. 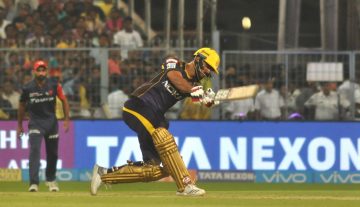