The table toppers, Chennai Super Kings (CSK) have managed to be at the top by defeating Rajasthan Royals (RR) in the 25th match of the 12th edition of the Indian Premier League (IPL) at the Sawai Mansingh Stadium in Jaipur. After winning the toss, the CSK skipper, MS Dhoni decided to bowl first on a tricky looking Jaipur track. However, CSK won a humdinger by 4 wickets.

During the toss, the RR skipper, Ajinkya Rahane revealed that they have made three changes to their squad, as Krishnappa Gowtham, Prashant Chopra, and Sudhesan Midhun made way for Sanju Samson, Riyan Parag and Jaydev Unadkat in their squad. On the other hand, CSK also made two changes as Harbhajan Singh and Scott Kuggelijn made way for Shardul Thakur and Mitchell Santner.

Both the RR openers, Jos Butter and Rahane added as many as 31 runs for the first wicket off just 17 balls before Rahane getting out in the 3rd over by Deepak Chahar in a forced DRS call.  In the very next over, Shardul Thakur got the wicket of Buttler as well after getting smashed for three consecutive boundaries. In the final powerplay over, Mitchell Santner dismissed the comeback man Sanju Samson owing to a juggling catch by Dhruv Shorey.

Despite those crumbling of wickets, Rajasthan managed to reach the total of 151/7 owing to some late fireworks from Shreyas Gopal, Jofra Archer, and Ben Stokes. CSK bowlers gave away 34 runs in the last three overs picking just one wicket and 18 of them came in the final over itself bowled by Thakur.

During the chase, Shane Watson was cleaned up by a brilliant delivery by Dhawal Kulkarni in the first over itself. Even Suresh Raina got out in the 2nd over of the game itself owing to a brilliant direct hit by Jofra Archer. After his dismissal, Unadkat sent back Faf du Plessis in the 4th over followed by Archer getting Jadhav in the 6th over the with the help of flying Stokes.

CSK was reeling at 24/4 after the first 6 overs and then came out MS Dhoni, who along with Amabti Rayudu added as many as 95 runs for the 5th wicket before Rayudu getting out in the 18th over after scoring a 50. After his wicket, CSK needed 18 runs in the final over.

The final over started with Ravindra Jadeja smashing Stokes for a six and surprisingly after hitting the six both the batsman and the bowler fell on the ground. The equation was then CSK needed 8 off 4 balls and Dhoni was then cleaned up by the bowler with a fiery yorker then, CSK needed 8 off the 3 balls. However, the game ended in CSK’s favor as Mitchell Santner smashed a six on the final ball. Both Rayudu and Dhoni scored the fifties.

WATCH – Last Over Drama During The RR And CSK Game 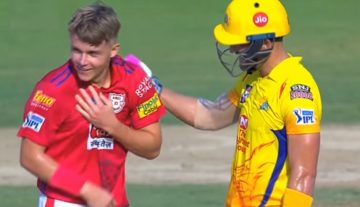