The Kings XI Punjab (KXIP) hosted the Kolkata Knight Riders (KKR) in the 52nd game of the 12th edition of the Indian Premier League (IPL). After winning the toss, the KKR skipper, Dinesh Karthik asked the hosts to bat first and they chased down the total of 184 quite comfortably.

During the toss, the KXIP skipper, R Ashwin said that they have made three changes in their squad as Mujeeb Ur Rahman, Prabhsimran Singh, and David Miller made way for Andrey Tye, Sam Curran, and Mandeep Singh. On the other hand, KKR made no changes to their winning squad.

Rahul got out in the 3rd over of Sandeep Warrier owing to a brilliant running catch by Chris Lynn and in the next over of the same bowler, Gayle also lost his wicket and Punjab was struggling at 28/2 after 5 over. However, something interesting took place in the final over of the powerplay. When Karthik was seen losing his cool on Andre Russell after the all-rounder got smashed for a six by Nicholas Pooran.

WATCH – Sam Curran Becomes Too Hot To Handle For KKR

After the dismissal of both the openers, KXIP was looking in deep trouble but Mayank Agarwal and Pooran then added 69 runs for the third wicket before the latter getting out in the 11th over of Nitish Rana. From 92/43 in 11 overs, Punjab again came down to 151/6 in almost 18 overs. However, Agarwal got out owing to the run-out affected by Sunil Narine in the 14th over.

KXIP was at 161/6 in 19 overs with Curran and Tye at the crease. In the final over of Harry Gurney, Curran smashed as many as 22 runs with the help of three fours and six. He helped Punjab to reach a decent total of 183/6 in their quota of 20 overs he completed his maiden IPL fifty as well.

During the chase, both the KKR openers, Shubman Gill and Chris Lynn came out all guns blazing as they scored as many as 62 runs for the opening wicket with the latter getting out on the final ball of the powerplay to Tye. Gill and Robin Uthappa then added 38 runs for a 2nd wicket as Ashwin dismissed Uthappa in the 11th over. However, in the very next over of the same bowler, Gill took the revenge by smashing a couple of sixes and a four in that over.

Then Russell joined Gill and they added as many as 51 runs for the third wicket as Russell was dismissed by Tye in the 15th over. However, with the help of another fifty from Gill, KKR chased down the score with 7 wickets in hands and 2 wickets to spare as Karthik and Gill scored more than 30 runs in almost 20 balls. 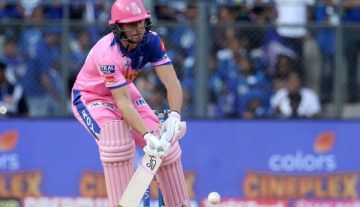