Murugan Ashwin, KL Rahul,  and Mayank Agarwal took Kings XI Punjab (KXIP) to a comfortable win against Mumbai Indians (MI) as they defeated the visitors by eight wickets at the Punjab Cricket Association’s IS Bindra Stadium in Mohali on Saturday and registered their second win of IPL 2019.

Chasing 177,  Punjab had a slow start with Jasprit Bumrah keeping things tight. While Chris Gayle attacked the other bowlers, Punjab could only score 38 runs in the powerplay. While Gayle smashed two sixes in the seventh over. Krunal Pandya dismissed Gayle in the eighth over to give Mumbai their first breakthrough.

While Mumbai would have hoped they could contain Punjab, after Gayle’s departure and Rahul struggling to up the ante. Agarwal spoilt those plans as he scored a quickfire 43 off 21 balls, hitting 4 fours and 2 sixes. While he failed to score a fifty, his knock took the pressure off Rahul and helped Punjab to keep the scoreboard ticking.

Mayank’s dismissal brought David Miller to the crease. However, Rahul started to unleash himself after Agarwal’s dismissal, as he upped the scoring rate before David Miller hit the winning runs to seal Punjab’s second win of the season with 8 balls to spare.

R Ashwin’s decision to pick Murugan Ashwin paid rich dividends as he scalped two wickets, conceding just 25 runs in his four overs in the first innings. Earlier in the game, Rohit Sharma attacked the Punjab bowlers as Mumbai reached fifty in five over, with him scoring 32 of those runs. After his dismissal, Suryakumar Yadav was the next man to get out to Murugan Ashwin, who replaced Varun Chakravarthy, to give Punjab their second wicket.

WATCH – Krunal Pandya Grabs A Bullet After Conceding A Six

Quinton de Kock, who brought up his 1000 runs in IPL, meanwhile kept the scoreboard ticking as the South African wicketkeeper-batsman scored 60 off 39 balls and was involved in a 58-run stand with Yuvraj Singh. However, both of them got dismissed in quick succession as Mohammed Shami dismissed de Kock and M Ashwin got Yuvraj out for 18. The duo of Kieron Pollard and Krunal Pandya failed to score big.

Here is the how Twitterati reacted to the win of KXIP:

KL Rahul, like Rahane yesterday, started off shockingly slowly but ends up making a solid contribution (and even winning the game).#IPL2019 #KXIPvMI

Clinical in a run-chase. Rahul’s innings was a fine example of how cricket is a team sport. First Gayle and then, Mayank allowed him to find form. #MI needs to figure out their batting order… #KXIPvMI

Top job by @klrahul11, staying till the end and finishing it nicely, another fantastic player @mayankcricket made going easy for Punjab. Gayle's start was vital too. #IPL#KXIPvMI

So here’s a mankad suggestion. 🏏
Why not get the 3rd umpire to check the front foot for no balls, if he/she notices a batter leaving their ground prior to delivery he/she can then issue either a warning, or 5 penalty runs. If the batter continues, mankad comes in no worries.

The respect given to Bumrah is unprecedented…batsmen have stopped trying going after him. Two overs in the power-play for 6 runs. Last game, last two overs for 6 runs. #KXIPvMI #IPL 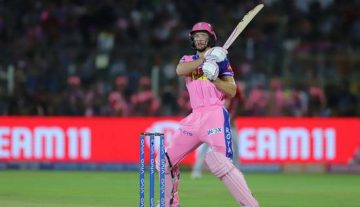