The Chennai Super Kings (CSK) and Mumbai Indians (MI) locked horns with each other in order to seal a spot in the final of the Indian Premier League (IPL) 2019. After winning the toss, the CSK skipper, MS Dhoni decided to bat first and his decision came back to bite yellow army as they lost the comprehensively.

During toss, the MI skipper, Rohit Sharma revealed that they have made just one change as Jayan Yadav came back in the squad to replace Mitchell McClenaghan. On the other hand, CSK had forced change as the injured Kedar Jadhav was replaced by Murali Vijay.

In the third over of the game itself. CSK lost the crucial wicket of Faf du Plessis off the bowling of Rahul Chahar. Following that, Suresh Raina was also dismissed by Jayant in the next over itself. Chennai lost Shane Watson on the final ball of the powerplay off the bowling of Krunal Pandya.

After that dismissal, Amabti Rayudu started building a partnership with Vijay as they added 33 runs for the fourth wicket before the latter getting out in the 13th over of Chahar. Dhoni came out to bat after that dismissal and along with Rayudu. He took his team to the end of the innings. Both of the started smashing the MI bowlers, especially Jayant Yadav and took CSK to the total of 122/4 at the 19-over mark.

However, on the first ball of the final over bowled by Jasprit Bumrah witnessed the maximum possible drama as first Dhoni got out on a full-toss as he lost the control of his bat and then it was revealed that the bowler delivered a no-ball. Eventually, the CSk managed to reach the total of 132/4 in their quota of 20 overs.

During the chase, MI faced some huge blows early in the innings as Rohit got out in the first over of Deepak Chahar followed by Harbhajan Singh dismissing Quinton de Kock in the 4th over. However, after that dismissal, Surya Kumar Yadav and Kishan made a solid partnership for the 3rd wicket. They scored as many as 80 runs for the 3rd wicket before the latter getting out in the 14th over of Imran Tahir.

In the same over, Tahir also dismissed Krunal, but Hardik Pandy and Yadav took Mumbai over the line with 9 balls to spare and 6 wickets in hand as Yadav scored a fifty as well. Mumbai has reached its 5th IPL final and now Chennai has to win the second qualifier to reach the final. 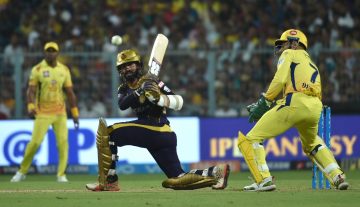