With the end of the fifth week of the 12th edition of the Indian Premier League (IPL), two teams have already been qualified for the playoffs and they are Chennai Super Kings (CSK) and Delhi Capitals (DC). However, DC is leading the charts with eight wins already under their belt.

On the batting front, David Warner is still leading the table with 611 runs in 11 innings at a strike rate of 143.76. While on the bowling front, surprisingly, the fiery pacer, Kagiso Rabada is still donning the purple cap as he has scalped 25 wickets and maintained an economy of 7.82 in the first 12 games.

Apart from batting and bowling, fielding has also been phenomenal from almost all the team in the second week of the tournament as well. Let us have a look at five of the best catches of the third week of IPL 2019. (P.S – It was difficult to choose just five).

Soon after completing his fifty, Steve Smith was dismissed in the 14th over. On the very first ball of the over, Axar Patel delivered a length ball and Smith went straight down the ground but mistimed it off towards long off, and Chris Morris takes a well-judged catch just by the boundary line. It was a consecutive fifty for the RR skipper. 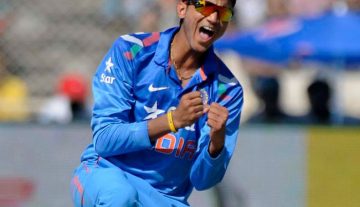