With the end of the league stage week of the 12th edition of the Indian Premier League (IPL), it’s still difficult to guess which team is the clear favorite in this season. However, the Mumbai Indians (MI) is leading the charts with nine wins already under their belt.

On the batting front, KL Rahul is leading the table with 692 runs in 12 innings at a strike rate of 149.86, while on the bowling front, surprisingly, the Delhi pacer, Kagiso Rabada is still donning the purple cap as he has scalped 25 wickets and maintained an economy of around 8 in first 12 games.

Apart from batting and bowling, fielding has also been phenomenal from almost all the teams in the sixth week of the tournament as well. Let us have a look at five of the best catches of the sixth week of IPL 2019. (P.S – It was difficult to choose just five).

Soon after Faf du Plessis’ wicket, Suresh Raina got out in the 15th over of J Suchith owing to a brilliant catch by Shikhar Dhawan. The bowler invited the batsman to step out. and beats him in flight yet again. Dhawan was pedaling sideways, then back, then front-on and then back again before he swiveled and grabbed the ball in front of his chest. 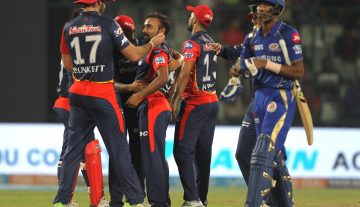