In the eliminator of the Indian Premier League (IPL) 2020 the IPL 2016 finalists, Sunrisers Hyderabad (SRH) and the Royal Challengers Bangalore (RCB) will be locking horns with each other at the Sheikh Zayed Stadium on Friday. SRH has been on a winning streak with three consecutive victories and a lot of credit for the same goes to Wriddhiman Saha and Jason Holder bringing much-needed balance to the team.

However, RCB lost their form recently. with four league consecutive losses, still they managed to reach the IPL play-offs. Despite their poor form, RCB has some stalwarts like Virat Kohli and AB de Villiers. With Devdutt Padikkal going through a purple patch, Bangalore will be banking on their batsmen to deliver. The potency of their bowling unit remains concerning, especially with the doubts around Chris Morris’s fitness.

ALSO READ: Qualifier 1 (MI vs DC) – Hits And Flops Of The Game

In the head to head matches during the league phase, both teams managed to defeat each other once. However, SRH’s stunning win last week against Virat Kohli and his men will definitely be having an upper hand in terms of confidence. With both teams looking to stay alive in the IPL, we can expect a nerve-racking encounter in Abu Dhabi on Friday.

AB de Villiers seems to be a better pick as he has been known for making a strong comeback and he will be much more effective on slow pitches this season. However, for SRH, Wridhhiman Saha will be keeping the wickets as he is known for playing match-winning knocks, but in order to maintain the balance of the IPL Fantasy XI, De Villiers seems the better pick.

Virat Kohli, Aaron Finch, Devdutt Padikkal, David Warner, and Manish Pandey have always been the prime contenders for fantasy cricket. Even, Gurkeerat Mann also is added in fantasy cricket and that will depend on the balance of the squad. Apart from them, there are some useful batsmen in the line-ups as well, like Priyam Garg, and Gurkeerat Mann.

ALSO READ: Ishan Kishan, Bumrah Guides MI To The Final With A Win Over DC

There are some really reliable all-rounders in both the teams but citing the pitch in Abu Dhabi, Jason Holder, Vijay Shankar, and Chris Morris seems to be the perfect fit. Apart from them, the good all-rounder for IPL fantasy cricket is Washington Sundar.

Both the teams don’t have decent bowling line-ups but they have managed to do a decent job. Bowlers like  Navdeep Saini, Mohammed Siraj, Yuzvendra Chahal, T Natarajan, and Rashid Khan become the obvious choices for the IPL Fantasy XI on the sticky track of Abu Dhabi. Apart from them, some crucial bowlers can be like, Sandeep Sharma, Umesh Yadav, and Khaleel Ahmed. 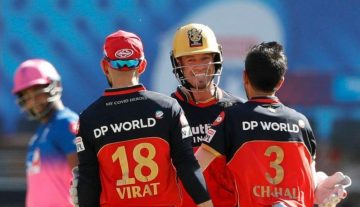