The final of the Indian Premier League (IPL) 2020 will be played between the defending champions Mumbai Indians (MI) and the Delhi Capitals (DC) at the Dubai International Stadium on Tuesday. After 59 high-spirited games, it comes down to MI and DC fighting it out for the IPL trophy. Both teams finished in the top two during the league stage of the competition.

It will be the most important game for DC in the history of the tournament. They have reached the IPL final for the first time in 13 years. And now that they are here, DC has the first-and-foremost task of selecting the best possible XI from their deeply stacked squad. However, tehy will be mulling ove rthe though of playing Prithvi Shaw in the final.

On the other hand, MI will be aiming for a record-extending fifth title against Delhi Capitals in the Indian Premier League 2020 final on Tuesday night in Dubai. Rohit Sharma & his men earned their rights to be in the finals after defeating DC in the Qualifier 1 by 57 runs. They will be looking to replicate the results to shatter DC’s chances of maiden title victory with a tactical change in the bowling unit.

The capitals have little cause to change a combination that worked so well just a day ago. The only consideration could be bringing in an extra fast bowler to replace of Praveen Dubey. They can also cosnider bringing back Prithvi Shaw to open the innings in oen the most important game for them.

Rohit Sharma was cautiously optimistic about Boult’s recovery from the injury that forced him off the field after bowling just a couple of overs in the first qualifier. He said: “Trent is looking good. He is going to have a session with us today and we’ll see how it goes. He pulled up pretty well in the last few days. So, fingers crossed, hopefully he plays.” They have no reason to make changes. 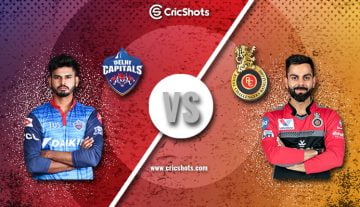