The Rajasthan Royals (RR) will not be having a lot of expectations from the upcoming Indian Premier League (IPL) 2020. Steve Smith and his men have already let go of a lot of experts and pundits, but RR is more than capable of pulling off a surprise. With an enviable balance of youngsters and veterans in their squad, RR has a genuine chance of making it to the playoffs despite having largely flown under the radar so far.

Jos Buttler has been a revelation for RR as an opener and has notched up consistent runs at alarming strike rates. The Englishman has shared the gloves with Sanju Samson, but in IPL 2020, it is likely that neither will be performing the gloveman duties as Robin Uthappa was excellent in the role when he performed it for the Kolkata Knight Riders (RR), and Sanju Samson is more than capable of opening the innings as well.

However, the young Yashasvi Jaiswal can also be expected to play at top-order as he can form an appealing right-left combination with Buttler. The 2020 U-19 World Cup hero will be keen on making an immediate impact in the IPL. There is a huge cloud surrounding the batting positions of these three batsmen, but this is the order that will be best for the team.

Given Sanju Samson’s capabilities against the new ball and the fact that he has often been seen batting well in the top 3 for the majority of his IPL career, he will come in at No. 3. The Kerala batsman will now be targeting to get a place in the Indian squad in the T20 World Cup squad.

Captain Steve Smith shouldn’t bat any lower than No. 4, which pushes Robin Uthappa down to No. 5. The former Australian skipper will be expected to play the anchor role for RR in IPL 2020, and the other batsmen in the middle order will bat around him. He hasn’t been in great form in the T20s and didn’t cross 20 runs in any of the three games that he played recently against England, but whenever he has taken the captaincy reins, he tends to his performances.

Ben Stokes hasn’t flown to the UAE yet, and there are certain chances that he will be missing a significant part of IPL 2020. However, with no official word yet, we don’t have a choice but to include him in this XI. The Englishman has been incredible for his country at the international level, but his IPL numbers don’t gove a lot of confidence. If Stokes is unavailable throughout the tournament, RR might replace him with English all-rounder Tom Curran, who would be a like-for-like replacement.

Riyan Parag and Rahul Tewatia will be the two spin-bowling all-rounders in RR’s XI for IPL 2020. While Prag’s position is guaranteed, Tewatia will be fighting for the position with Mayank Markande as Rahul also has the ability with the bat. Jofra Archer will take up the final overseas slot in RR’s playing XI for IPL 2020 as his raw pace and aggression will add a new dimension to the bowling attack, and he will be entrusted with the new ball and in the slog overs as well.

Shreyas Gopal will be the final spinner in the team and he is handy with the bat, which means that RR’s batting will be quite deep in IPL 2020. The final spot in this XI is a toss-up between Ankit Rajpoot, Kartik Tyagi, Akash Singh, and Jaydev Unadkat, and the Saurashtra pacer is likely to get the nod due to the experience he brings to the table. 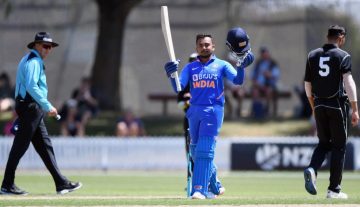