There is no denying the fact that Kings XI Punjab (KXIP) felt more joyful than any of the other franchises when the Indian Premier League (IPL) 2020 was moved to UAE as in 2014, they had won 5 out of 5 matches in this nation – a record very different than their 12 years journey. Come to 2020, a satisfactory squad at the Auction, and a new skipper in KL Rahul, KXIP would look to retain the momentum in the Arab cities.

Squad-wise, KXIP is looking balanced, especially their batting, which is second to none in the competition, KXIP also boasts of good all-rounders, and quality bowlers. There is no denying the fact that the opening partnership of KXIP is formidable with Rahul expected to open with Chris Gayle. The former will also be performing the wicket-keeping duties.

Gayle might be inconsistent, but the day in which he will fire, he will make sure that the opposition bowlers don’t get room to hide. Nevertheless, he needs to strike big or else, Nicholas Pooran might be quickly drafted into the playing XI at his expense. The middle-order of KXIP could witness a few changes as the tournament goes forward, but at least for the initial matches, we would witness 3 Indian players and Glenn Maxwell in the middle-order.

Mayank Agarwal has all the elements to bat at no.3 despite the fact that, but in IPL, his form has been underwhelming. However, with Maxwell batting below him, Mayank will bat with a lot of freedom  Also, in UAE, the conditions could support Mayank to be more attacking, and rediscover his aggressive style of batsmanship.

IPL 2020 will be a make-or-break season for Karun Nair. Although Sarfraz Khan played more games than him last season and hence, the latter can be expected to playing in the starting XI, given his recent performances in domestic cricket. There are just three stadiums in the UAE, and this will help Karun, who has had a tough time adapting to newer conditions earlier.

Mandeep Singh would act as the finisher, but KXIP also has the opportunity to experiment with James Neesham and Deepak Hooda; both of them capable of being the finisher they need. The words UAE and IPL 2014 go hand in hand for Maxwell, who had amassed 300 runs from 5 games in 2014, and KXIP would hope that the Aussie can have the same impact in 2020 too.

Krishnappa Gowtham would be more valuable in UAE, as his slow off-cutters would be a lethal option combined with his pin-hitting abilities. The bowling unit of KXIP would actually be happy that IPL 2020 is held in UAE. This department lacks pace, but with the relocation, KXIP can be expected to have an upper-hand. Hence, KXIP can also afford to replace pacer Ishan Porel with Ravi Bishnoi, who can be lethal on the UAE pitches.

Talking about the core, Shami would yet again be the leader of the pace bowling unit combined with support from Sheldon Cottrell. Similar is the case with Mujeeb, who is likely to be the man for the middle-overs. Cottrell will lend the X-Factor to this squad as he can surprise the batsman with his variations. 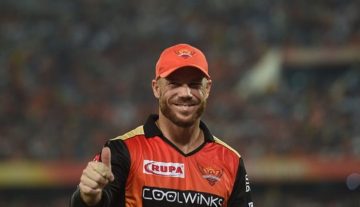 News
By SMCS - Aug 1, 2021
David Warner replies to his female fan in a great way