A couple of days ago, the Taliban had announced that the second half of the 14th edition of the Indian Premier League (IPL) 2021 will not be broadcasted in Afghanistan as the league showcases anti-Islamic content that shows girls dancing and barred hair women in attendance.

Tweeting about the same, a reporter named, M.Ibrahim Momand wrote: “SportRta has resumed broadcasting the ongoing IPL but the matches will be recorded & telecast after the removal of some non-Islamic contents from the live matches & will broadcast on one day delay.”

@SportRta has resume broadcasting the ongoing @IPL but the matches will be recorded & telecast after the removal of some non-Islamic contents from the live matches & will broadcast on one day delay.

The MS Dhoni-led Chennai Super Kings (CSK) is currently standing in first place in the IPL points table. The three-time IPL champions started their campaign in Phase 2 of the IPL on a rousing note, as they defeated Mumbai Indians (MI) by 20 runs.

In the second match of the IPL second leg, the Kolkata Knight Riders dished out an absolute mauling to the Royal Challengers Bangalore (RCB) side. The Eoin Morgan led Kolkata side beat the Virat Kohli led Bangalore side with 9 wickets and 10 overs to spare.

The third match of IPL Phase 2 saw the Rajasthan Royals (RR) registering a close win over Punjab Kings (PBKS) in a roller coaster of a contest. With 4 runs needed off the last 6 deliveries, PBKS were the favorites to win the game but they eventually lost the game by 2 runs. 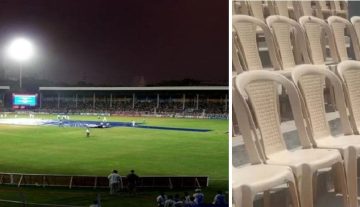